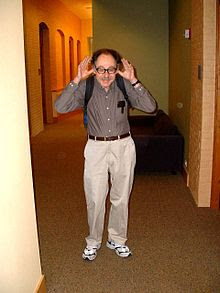 The participants of the "quantum debates" are encouraged to watch this inspiring, insightful, no-nonsense lecture given by Sidney Coleman at the New England sectional meeting of the American Physical Society (Apr. 9, 1994):


Sidney R. Coleman, Quantum Mechanics in Your Face (click for 67 minutes of video; it is also embedded below)

Sixteen years ago, the APS wasn't a shameful mouthpiece of the environmental extremists yet. It helped to nourish and promote actual physics.

A few years ago, when I was at Harvard, Brian Greene (together with a few friends at Columbia) asked me to arrange some copyrights so that he could have used this lecture, too.

I was kind of sure that he wouldn't use it - because in the lecture, Sidney Coleman crisply and beautifully clarified some of the very same points that I was trying to explain to Brian Greene just a few weeks earlier (before he asked me to get the permission).

While I thought and still think that The Fabric of the Cosmos is an excellent book, the "anything goes" attitude to pretty much all bizarre "interpretations" of quantum mechanics is perhaps too much out of control. And yes, the stuff in the FOC written about the arrow of time is just a full-fledged crackpottery.

In 1994, Sidney had also made similar comments about those who misunderstood why quantum mechanics just works - and it works according to its own rules.


In particular, Sidney explains that our world is a quantum world and any phenomena that look classical are approximate or derived. So it's really nonsensical to ask for an "interpretation of quantum mechanics". Instead, one should really discuss the "interpretation of classical physics" and its derivative appearance from the quantum framework.

Coleman showed that the opinions that there was a "nonlocality" in EPR-like phenomena were misconceptions, too. There is not even an interaction Hamiltonian between the two subsystems when they get separated, so of course that there is no nonlocality, either. Around 34:00-35:00, his demonstration of the quantum mechanical nature of the world based on the GHZM state culminates. Coleman thinks that this setup is more pedagogical than Bell's inequalities.

Coleman only needs to assume that causality holds: the future cannot influence the results in the past. In another reference frame, the chronology of 2 spatially separated events is reverted. Causality requires that the 2 events can't influence each other at all. That's a proof of locality and locality, together with the experimentally tested facts, implies that the probabilistic outcomes can't result from hidden variables. Prof Diehard who refuses to accept quantum mechanics is shown to be wrong.

Coleman stresses around 33:00 that in a striking contradiction to the pronouncements in much of the popular and even not so popular (i.e. somewhat technical) literature, the dichotomy here is "quantum mechanics or nonlocality", not both!

Around 46:00, Coleman rejects some basic introductory comments about quantum mechanics that he also reviewed at the beginning of the lecture, e.g. that there is a "collapse" of the wave function. In fact, there's no collapse, as he says between 46:00 and 47:00.

In fact, Sidney also showed that many of the would-be "mysteries" are not mysterious at all. For example, why don't we ever perceive the linear superpositions of dead and alive cats? That's a question that Wojciech Zurek asked in this way. Coleman has simply made the calculation of Sidney Coleman's feelings after he observes a cat. Needless to say, the "dead cat" state leads to "Sidney perceiving a dead cat" while the "alive cat" leads to "Sidney perceiving an alive cat".

(Coleman also reviewed an equivalent argument why the lines in the bubble chamber are straight - an argument that was known to Nevill Francis Mott, not Motl, many decades ago. To understand what's going on, it's important to appreciate that the bubble chamber - much like Coleman - is a quantum object.)

A general superposition produces the corresponding superposition in the final state. But the probability that Sidney Coleman perceives a "mixed" cat is clearly zero - a conclusion he reaches around 55:00 or so. It's enough to use the standard framework of quantum mechanics and treat the observer - Sidney Coleman - as just another quantum system. It's one of the key points that all objects - including observers - are subject to the laws of quantum mechanics.

Equally directly, Sidney could also prove that the repeated experiments produced random outcomes. There are no autocorrelations or periodicities, as he proves around 1:00:00. Again, this proposition boils down to a trivial calculation. And the measures of all the correlations you can think of go to zero as you send the number of repetitions N to infinity.

You can show that the probability of randomness of an infinite sequence is 100%: whenever the probability of something is 100%, you can prove it by quantum mechanics even without assuming anything probabilistic going on! And the randomness of the outcomes of infinitely many repetitions of the same experiment is "paradoxically" such a statement that is 100% certain! ;-)

The main reason why people fail in these matters is that they're not able to overcome certain dogmas that have been imprinted into people's intuition by millions of years of everyday "classical life" and by centuries of worshiping of the classical physics.

At the very end, Sidney paraphrases a wise comment by philosopher Ludwig Wittgenstein. People used to believe geocentrism. Wittgenstein asked why people usually considered such a history "natural". His friend told him that it was because it "looks like" the Sun is revolving around the Earth. Wittgenstein replied with this key point:


Well, what would it look like if it had looked as if the Earth were rotating? :-)


Obviously, it would look exactly like the world around us. ;-) It's natural for things to move - and people could have known for quite some time that "free motion" is indistiguishable from the rest (the old principle of relativity, perhaps combined with the equivalence of inertial and gravitational masses).

Some people try to justify the scientifically invalid approach of the geocentrists but they are just wrong. The conclusion that "it seems that geocentrism had to be valid" was always completely irrational. It couldn't have ever been justified by the scientific evidence. Geocentrism was always a naive emotional dogma that was spreading by the "consensus" of the blinded believers, not by rational arguments.

In the very same way, some people keep on saying that it "looks like" there must be a classical mechanism beneath the quantum phenomena - a real process corresponding to the reduction of the wave packet. But Coleman encouraged everyone to seriously consider the following question:


Well, what would it look like if it looked like that the world is really following the causal laws of quantum physics without any reductions of the wave packets - and not any laws of classical physics - at the fundamental level?


Needless to say, it would look exactly as our ordinary everyday life. Welcome home. :-) And thank you for your patience.


Sidney Coleman was the physicist's physicist. Additional Coleman's videos are available for you, too.

The three spin-1/2 particles are prepared in the GHZ state, as later clarified by Mermin,


Each of three Dr Diehard's students measures one of the particles. The student randomly presses X (A) or Y (B) on the black box - and he measures sigma_x or sigma_y, respectively. The experiment is repeated millions of times.

If one of them measures sigma_x and two of them measure sigma_y, which is in 3/8 of the cases, the product of the three eigenvalues (each of which is +1 or -1) will be +1 as can be shown by a simple quantum calculation. sigma_x1 sigma_y2 sigma_y3 acting on the GHZ state gives the state back (times +1). The GHZ state is an eigenstate with eigenvalue +1.

This very fact directly contradicts the basic proto-classical reasoning underpinning classical physics because this reasoning implies that the product of the three eigenvalues has to be +1 in all these cases, too. Quantum mechanics always gives exactly the opposite answer - something that is possible because the operators sigma_x and sigma_y don't commute. In fact, they anticommute - something that is entirely impossible for observables in classical physics.

Why would the proto-classical reasoning predict that the product of sigma_x1 sigma_x2 sigma_x3 has to be +1? Well, it's simple. In the classical reasoning, sigma_xi and sigma_yi are classical observables (that can also depend on hidden variables lambda), and the correlation in the 3/8 of the experiments - which produced the product +1 - imply


That's what can be statistically deduced from millions of measurements which show the correlations in the XYY, YXY, YYX measurements. The three sigma quantities may have a random aspect but the observed correlations shows that the three equations above have to be satisfied with accuracy that can be experimentally shown to be as exact as you want.

However, one can simply take the product of the three equations above to deduce that


One just assumed that sigma_xi and sigma_yi objectively existed before the measurement. While it may sound incredible, the experimentally verified quantum product is exactly the opposite,

Why the classical physics has really failed is the refusal of the observables to commute in the actual, quantum world. In fact, sigma_x and sigma_y anticommute. This fact is not possible to reproduce with any classical mechanism, regardless of the complexity of the hidden variables you include.

According to (proto-)classical physics, the answers to the measurements of sigma_x or sigma_y had to exist before the measurement. Whatever hidden variables you include, this really includes the assumption that these quantities commute with each other. But they don't. As quantum mechanics shows, they often anticommute, in fact.

However, the probabilistic character isn't the only new thing in quantum mechanics. The uncertainty principle - the nonzero commutators - is another fundamentally new development and the hidden variables simply don't solve it. So for example, you can't design any sensible Bohmian theory that would describe the GHZM experiment with three spins. And spins are just a beginning: the whole quantum physics contains similar new non-commuting observables pretty much everywhere.

Quantum mechanics in its proper form is the only framework that can work as a description of similar microscopic (and not only microscopic) experiments.
Luboš Motl v 9:52 AM
Share