Everyone in the Czech Republic knows Chuck Norris. In the 1980s, most Norris movies were actually smuggled into the country but he has already been well-known at that time. "Walker, Texas Ranger" was also among the first typical Western TV shows (thanks Mike) officially broadcast after the fall of communism.

Two months ago, T-Mobile Czech Republic, a Germany-based top cell-phone-service and satellite TV provider, ran a series of commercials that became hugely popular - millions of views at YouTube which is not bad for a commercial in a country of 10 million.

Norris was paid about $400,000 for the ads. His Czech colleague, actor Mr Valouch whom you will see, has received a free cell phone and became a new life-long Chuck Norris fan. ;-) While T-Mobile was most successful in the Christmas time, its competitors had creative ads, too. Vodafone has shot a few ads with Christmas trees that call each other while O2 has created origami paper cell phones.

The hostess says "Master!?" However, he refuses to kill the carp. What happens afterwards could be misinterpreted: Chuck Norris didn't faint; he just showed the floor who the boss was. ;-)


At the end of the ad, the husband of the hostess summarizes the situation: "Yup, yup: anyone may be sharp (tough) on TV." T-Mobile satellite TV offers a genuinely sharp image.

The comments under the YouTube video are funny - lots of new Chuck Norris facts are included.

"Hedgaaar - huh - huh. Mr Norris, now I will show you something." [Boom.] Chuck Norris doesn't spare anyone. T-Mobile will give you a free LCD TV after you purchase its three services.

"Sir, could you please take a photograph of us? It's the first time when my son bruslí [= is skating]." - "Bruce Lee? No. Chuck Norris." Chuck Norris won't give you everything for free. T-Mobile will give you a free digital frame if you buy one service.

"Look you, you will be impressed." - Chuck Norris won't give you anything for free. T-Mobile will give you a stylish netbook if you purchase two services.

Empower yourself at this time of advent. Buy prepaid credits at least for $20 and you will gain an advantage for every weekend. This Saturday and Sunday, the calls are free.

"Look, Ms Zuzana Noris[ová]. Isn't she a relative of yours?" - T-Mobile's satellite TV wishes you a star entertainment.

"Oh, I see, you are in Čakovice [Chuckville], Chuck (a neighborhood of Prague). I thought you got lost." Chuck Norris can never get lost. For the rest of us, T-Mobile brings a free Nokia phone with navigation forever for free.

"And just to be sure, where do you know him from?" - "Do you mean Norris? I thought that it was you who knew him."

You may also play a special T-Mobile Flash game where you have to defeat Chuck Norris by your muscles, lasers, and arrow keys. At the beginning, Chuck Norris speaks in Czech with the Oklahoman accent or at least it's supposed to be this way haha. ;-)

Chuck Norris recently protested against climate treaties as a method to enslave America and create a world government. 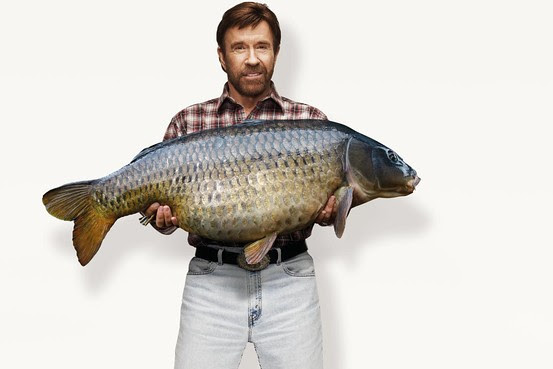