Today, the ministers of the European Union unanimously confirmed a two-day-old decision about the location of the administrative headquarters of the European (and Israeli) refined competitor of the Global Positioning System (GPS). Ours will be called Galileo and will begin its operations in 2014. 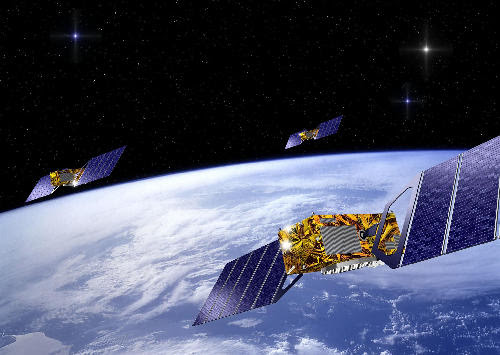 Those 30 satellites included in the EUR 3.4 billion system will be able to do what the GPS is doing but more accurately so. Unlike the GPS, Galileo won't be operated by the military; unlike GLONASS, it won't be supervised by the Russian bear. The low-precision basic service will be available for free while the high-precision services will be paid.


Only two places competed at the very end: Prague, the capital of the Czech Republic (1.2 million people), and Noordwijk in the Netherlands (40,000 people). At the end, Prague received 22 votes out of 27 (the number of EU member states); one vote was supporting the Dutch supersized village and four countries remained neutral.

Because of Galileo's trouble with the church, only a predominantly atheist country had a chance to host the headquarters. That left Czechia and Holland. The Dutch emphasized that they're so godless that drugs can be bought everywhere and, which is a related advantage of the Netherlands, that gravity no longer exists in their country: it has become an entropic force over there. ;-)

However, unlike Czechoslovakia, Holland wasn't the third country in the world with an astronaut in space. ;-)

A nine-minute promotional video for Galileo...

The European officials have insisted that the country hosting Galileo must be controlled by the courageous climate skeptics. The Czech Republic remained the only acceptable solution. The European politicians particularly appreciated the brave and penetrating insights and attitudes of the Czech president and your humble correspondent. ;-)

Another reason why the competitors of Prague had no chance was that the headquarters can't be further than 100 kilometers from the center of the world. In fact, the headquarters will be located in Prague-Holešovice, in the building that used to belong to the Czech Consolidation Agency, a semi-independent bank that was trying to stimulate and reorganize problematic companies between 2001 and 2007 when it was canceled:

The large building in Janovského St 2 is just 2.1 kilometers from the student hostels where I lived between 1992 and 1997.

According to the most recent official Eurostat data, Prague is the fifth wealthiest region of the European Union after London, Luxembourg, Brussels, and Hamburg - ahead of Ile de France, popularly known as "Paris", Groningen, Bavaria, Stockholm, Vienna, as well as all other cities that haven't yet been mentioned. ;-)

600 years ago, Prague prepared for Galileo by creating the most accurate Prague Astronomical Clock, or orloj, in the world - instead of the atomic clocks. ;-) The video above is an impressive light show if you haven't seen it yet.

Well, the Galileo navigation system is still pretty far in time and many things may change before 2014.
Luboš Motl v 5:31 PM
Share