Throughout most of 2010, The UAH AMSU daily satellite temperature data have been showing almost each date to be the warmest one since 1998 or 1999. That was pretty much universally the case from January till the end of August. 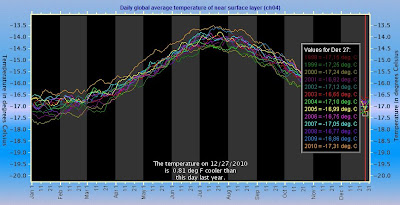 
Things have gone in a different direction in the following four days. The most recent figure for the global brightness temperature is from December 27th, 2010, and it is -17.31 °C. This piece of data is the coolest number for a December 27th at least since 1998 (included). 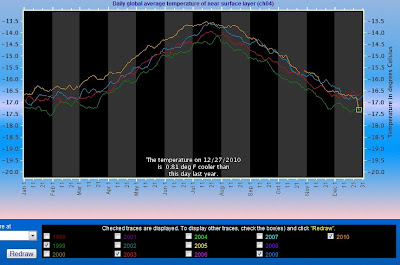 The cooling between December 23rd and December 27th, 2010 is a whopping 0.56 °C. Pretty much all of 20th century global warming may have been erased within 4 days - the same time that Apollo 11 needed to get to the Moon, as correctly predicted by Jules Verne. ;-)

Did you notice that the "catastrophic" centennial global warming has disappeared in those four days? I don't think so because the observed centennial changes of the temperature have been zero for all practical (and a majority of impractical) purposes.

Because the end of December is near the annual minimum of the global temperature when the normal temperature is pretty much flat, almost none of those 0.56 °C can be attributed to the seasonal cycle. It's all about the random natural variability.

Despite these changes, GISS will probably declare 2010 as the warmest year but the other teams won't. Chances are that according to HadCRUT3, 2010 won't even be the second (or third) warmest year. Moreover, the cooler-than-normal temperatures are likely to continue (or escalate) in 2011.

Because La Nina is predicted to last at least through Spring 2011 (the most recent weekly 3.4 anomaly is -1.7 °C - it has strengthened again) and because its effect on the global temperature is delayed by 6 months or so, chances are that we will see cool global temperatures at least through Fall 2011. It is relatively plausible that 2011 will become one of the coolest years in the recent decade(s).
Luboš Motl v 10:14 AM
Share