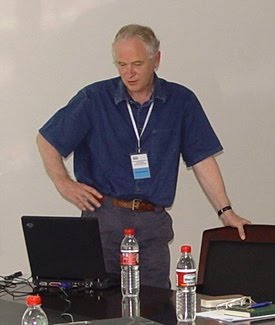 It just happens that since the ClimateGate, Jones' team is indicating a much lower warming trend than Hansen's team: Phil Jones' HadCRUT3 dataset is attributing November 2010 the coolest rating among Novembers and among the four datasets - with a 0.43 °C global anomaly, it was the 7th warmest November - while the GISS dataset says that November 2010 was the warmest November on record.

The satellite datasets sit in between: November 2010 was 3rd for UAH and 6th for RSS.


The same significant discrepancy exists for the whole year 2010.

Setting the Dec 2010 anomaly to the Nov 2010 anomaly for HadCRUT3 as well, the top five ranking - with years and anomalies - will be
If the December's anomaly will be higher/lower than the November anomaly by "D", you have to add/subtract "D/12" from the 2010 figure above. So you see it's not quite impossible that 2010 may drop up to the fifth place - assuming month-on-month cooling by  0.2 °C. However, it is already de facto impossible to beat 1998 - the month-on-month warming would have to be 0.7 °C or so while the biggest month-on-month changes they have seen since 1880 were +0.44 and -0.54 °C.


In the newest conversation with fellow activist Bill McKibben, James Hansen uses the term "deniers" nine times. You're so courageous, Mr Hansen, to have skipped several doses of your medication! ;-)

But we surely appreciate your opinion that the skeptics should receive a Nobel prize for having showed that the data supporting "climate disruption" were wrong.

A new development is that two days ago, the New Zealand climate agency (NIWA), after a patient battle by the Kiwi climate realists and auditors in general, has abandoned their previously distorted temperature data that showed a degree of warming, and returned to the data that show no warming. Via Daily Bayonet and Karlos.


Met Office denies that it has predicted anything about the winter

According to its Chief Press Officer, the British Met Office categorically denies that it has made any predictions about the weather in this winter.

However, they didn't manage to burn and delete all U.K. newspapers from October 28th, 2010. 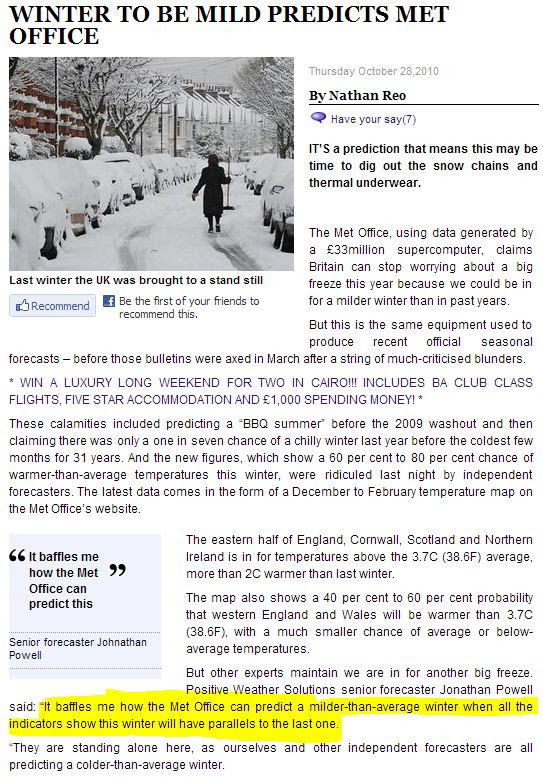 If they manage to delete the web page above, here's a copy to prove that the Met Office is composed of deniers or, more precisely, shameless liars and crooks.
Luboš Motl v 8:45 AM
Share