Supersymmetry is an exceptional mathematical structure, and if identified in Nature, its discovery will become one of the greatest achievements of science ever and the most specific evidence supporting string theory.

This achievement could very well take place within months although those 6.8 billion people who don't read this blog and who are not professional particle physicists are totally ignorant about this possibly coming huge event. The media are silent and even most of the physics fans seem to have no clue.

However, we haven't seen supersymmetry yet. Various experiments have shown new effects to be pretty small, making it statistically impossible for the supersymmetric parameters to occupy any point in a "majority" of the parameter space that is being used to describe some basic quantitative properties of SUSY in Nature.

Is there any point left that hasn't been excluded yet?


A new Indian preprint offers a remarkable type of a "Yes" answer:


Do new data on [B+ → tau+ nutau] decays point to an early discovery of supersymmetry at the LHC?

Four authors from the Tata Institute systematically look at the portions of the cMSSM (constrained Minimal Supersymmetric Standard Model, a subset of the MSSM parameter space that can be derived especially from mSUGRA models) that have been ruled out by various experiments at the 95% confidence level.

Indeed, lots of the volume has been ruled out. But there is a shockingly small island that is compatible with everything - and whose new physics is actually helpful to explain some recent Belle and BaBar deviations from the Standard Model. Here is the physics test for you: can you find the yellow islands on the pictures below? 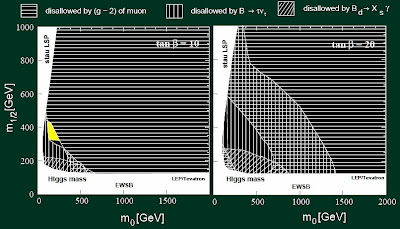 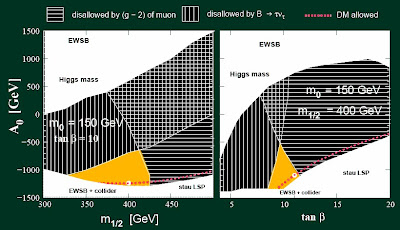 Congratulations! I knew you could do it. Even I could do it. ;-) So here are the predicted parameters if Nature happens to choose the supersymmetric island (note that the region is not a vertical-horizontal rectangle so the exact intervals for different quantities are correlated with each other - the intervals below are just estimates):
The numbers above give you some idea about the uncertainties. However, let's follow the Indian physicists' recipe and choose a specific benchmark point inside the allowed simplex in the parameter space:
They can predict many other things at this point:
The squarks and gluinos are heavier because of the mSUGRA assumptions; without them, one may obtain lighter squarks and gluinos without violating the Tevatron bounds. In fact, those light superpartners could be even missed at the LHC!

But back to the mSUGRA parameters above.

These numbers could explain a Maria Spiropulu candidate event (page 29/36) if that event saw a 200 GeV slepton and a 160/164 GeV LSP neutralino. Spiropulu also quoted the right tan(beta)=10 and the correctly positive mu; her A_0 was -400 GeV, somewhat less extreme but still negative. The integrated luminosity has quadrupled or quintupled since the moment of Spiropulu's talk.

At these values, the light Higgs can only be detected from a decay into two photons which is very hard and will probably need years even at 14 TeV. However, the supersymmetry discovery would be much easier. The total cross section for the production of superpartners would be 0.4 pb or so - about 100 events have already produced superpartners at each detector. 30% of them produce stop-antistop pairs and an additional 30% of them produce other squarks.

In 2/3 of the cases, the stop decays into the top quark and a neutralino - missing energy. If the island is realized, hints of SUSY will be seen during 2011. A five-sigma discovery would occur within months of running at 14 TeV.

Now, you could ask whether it isn't crazy that SUSY is hiding in a small island? Isn't it like searching for Osama bin Laden all over the world and missing one cave - and Osama bin Laden hides exactly in this single cave? ;-)

Well, the bin Laden scenario sketched above is unlikely. However, it is not an argument against the existence of Osama bin Laden - or supersymmetry, for that matter. Why not? Simply because in the case of the supersymmetry or mSUGRA fitting, we already know that this unlikely event has taken place, whether or not SUSY is valid! ;-)

Even if SUSY isn't there, it is unlikely that the experiments exclude a vast majority of the hypothetical parameter space but still preserve an island somewhere in the middle. But this unlikely event has demonstrably occurred - if the Indian paper is right. So while unlikely things rarely occur, they sometimes do and this is an example. Because this unlikely proposition has been settled, you need to assume it is right in all your considerations. And if you assume it is right, it doesn't decrease the relative chances of SUSY's being right - relatively to its being wrong - in any way.

The particular benchmark model they extract does imply that the experiments done so far couldn't have detected SUSY - indeed, the model shows that you need many months or a year at 7 TeV - but it also does imply that the other experiments would exclude pretty much exactly the regions that they have excluded. ;-) So if low-energy SUSY is right, and it apparently can be, those experiments have simply "measured" something about the unknown parameters.

The benchmark points predicts pretty much exactly what has been seen - anywhere. And it is not a point in which the SUSY effects are artificially adjusted to be small. On the contrary: the surviving point seems to be a garden-variety supersymmetric model. After all, it suggests that the discovery will occur early.

Also, and I haven't made it clear yet, the Indian paper considers not only evidence that indicates that there's no new physics; it also takes various 2-sigma deviations into account when they constrain the parameters. The surviving region is actually helpful to explain them. In this sense, the surviving island is actually favored over the Standard Model.
Luboš Motl v 9:19 AM
Share