So far, each major LHC detector has acquired about 47/pb of data and 43/pb i.e. 92% of the events have been recorded. The "slash pb" thing should be read "inverse picobarns" if you need to know.

While only tiny fractions of one picobarn were analyzed in the talks presented at the LHC First Data in Michigan, we're entering a much more generous Christmas season.

By now, 35/pb - i.e. a big majority - of the CMS data have been analyzed. Today, CERN organized the LHC end-of-year jamboree. For non-native speakers, jamboree is a kind of a wild party.


Update: In January 2011, CMS will release a preprint (click) on the new limits


As the previous link reveals, Philipp Schieferdecker (KIT, Karlsruhe, Germany) spoke about the CMS 35/pb data. Obviously, the most excited slide is 22/40: 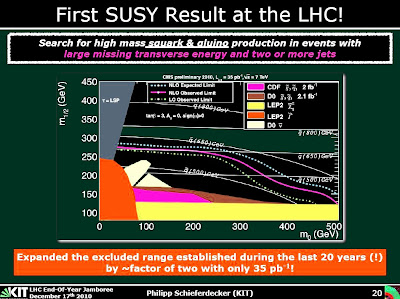 At the very bottom, the yellow and orange big regions (the rectangular eurobanana and 1/4 of an euroorange) were excluded by two different methods at LEP2, the previous electron-positron collider that occupied the same tunnel at CERN that belongs to the LHC today.

The grey pseudo-triangle on the left margin is excluded because stau would be the lightest supersymmetric particle (LSP) and this (not so) dark matter would become visible - a clear problem.


Less trivially, CDF at the Tevatron in the U.S. has excluded the purple region sitting on the yellow one while D0 at the Tevatron has added the random small light-beige and brown regions on top of the CDF area.

You may see how much more powerful the LHC is in deciding about the new physics: the energy edge makes a difference.

The CMS detector has now excluded the whole region up to the purple line. Just to be sure, all these geometrical shapes are drawn in a plane parameterized by "m_0" in GeV on the x-axis and "m_{1/2}" on the y-axis.

You see that the CMS saw a "weaker falsification of very light SUSY" than expected - i.e. a bit higher number of events with a large transverse missing energy and many jets, relatively to the expectation - although the difference is probably not statistically significant. Unfortunately, the graph doesn't show the 1-sigma and 2-sigma bands so I can't tell you.

In principle, supersymmetry could have been in the bottom layers but it's not there. Just to be sure, the CMS is still very far from deciding about the most realistic places of the parameter space.

Where the most likely values sit

In particular, we recently mentioned the surviving Indian supersymmetric island. Instead of a vanishing universal cubic coupling "A_0" and instead of "tan(beta)=3", it has a large negative "A_0", around minus 1 TeV, and "tan(beta)=10" or so.

Also, the relevant "m_0" is around 100-200 GeV which could be in the excluded region. However, it's not because "m_{1/2}" of the Indian supersymmetric island is close to 400 GeV. If you look at the graph above and find the text

However, it is not infinitely far.

So it's pretty likely that the fate of the Indian supersymmetric island could be decided well before the first femtobarn which should be, according to the current projections, in the first half of 2011.

But you should better not bet too much money on the assumption that better exclusions limits are the only thing that can expect in 2011. ;-)

Today, the competing ATLAS data were presented by a nurse named Emily of UCL. ;-) It doesn't seem to include analyses of dozens of picobarns of the real data which we received from the CMS.

Incidentally, the LHC has already rapidly increased lower bounds on masses of all kinds of impossible objects - such as preons - as well as extremely unlikely objects - such as TeV-scale black holes or W' bosons. I won't discuss these models of physics unless some unexpected event occurs because it is pretty much obvious that it will not occur.

I hope that the TRF readers don't have to repeatedly hear that the black holes must almost certainly be heavier than 10^{19} GeV, the Planck scale, and that quarks are not composite (in the point-like particle sense), among many other statements.
Luboš Motl v 8:49 PM
Share