In November 2009, the ClimateGate erupted and many of us were convinced that the establishment of climate fear would quickly collapse. I was imagining that it would be as fast as the Velvet Revolution that began exactly 20 years earlier. 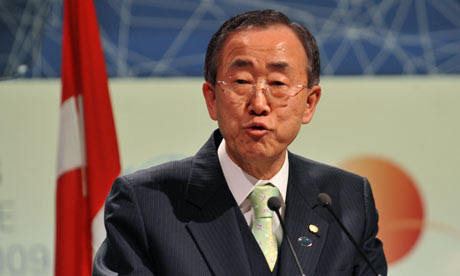 So many climate skeptics were disillusioned by the speed. Now, 14 months later, things are beginning to move at the top places. Barack Obama hasn't mentioned any climate, warming, disruption, carbon, or fossil fuels in his key annual talk - even though he was talking for a whole hour. The Guardian just brought us another dose of good news:


The boss of the United Nations will stop his personal involvement in the battle to regulate the world climate. Instead, he will try to achieve "immediate gains" in the field of clean energy and sustainable development. Even his U.N. colleagues have apparently understood that there can't be any "deal".


Now, obviously, I have nothing whatsoever against clean or renewable energy sources. My only complaint is against huge subsidies of such things that used to be justified ideologically - by the deluded propaganda about climate disruption.


Directly relevant hot news: You may ask a question to the U.N. boss at CNN now (click)


If this propaganda really goes away, as Obama and Ki-moon indicate by their shifted attitudes, there is a hope that common sense and rational costs-and-benefits analysis will return to the energy industry and beyond.

In the 2011 State of the Union address, Obama also mentioned oil and biofuels that could replace it. That's surprising because even Al Gore has admitted that their support of biofuels was a big blunder. On the other hand, I can imagine that there will exist biofuels that actually make economic sense.

What I find important is that politicians will no longer promote nonsensical solutions by general slogans that are based on bad science, fearmongering, and intimidation referring to insane planetary emergencies. We, the climate skeptics, have been warning against such irrational attitudes and we have been proved right pretty much in all cases. First-generation biofuels as well as carbon trading has been showed to be a disaster while solar and wind power turned out to be significant economic problems in many countries such as my homeland.

(By the way, I just heard on radio that the Czech Republic is selling 40% of the world's sold carbon indulgences - if true, it is an amazing percentage for such a relatively small country.)

Well, of course, I don't believe that the politicians will completely stop doing irrational things. But the amount of this bad policymaking could simply decrease as the rats are gradually leaving the rotten and sinking bandwagon. Let us hope that many other politicians will follow in Obama's and Ki-moon's footsteps. As many more people regain their common sense and all plans to regulate carbon evaporate, almost everyone will see that the Earth is doing just fine and the climate skeptics have saved trillions of dollars.

Will they be rewarded or will they remain the silent heroes who have just saved the civilization without any greed? ;-)
Luboš Motl v 10:08 PM
Share