Three weeks ago, we discussed a top-antitop asymmetry that was observed by the CDF. The signal was 3.4 sigma.

One of the possible striking explanations is a new heavy gluon that interferes with the massless one - a particle that could be the ordinary gluon moving in the extra Randall-Sundrum directions of space if that model were relevant for the LHC.

Amusingly enough, as Jester at Résonaances has pointed out, the CDF is seeing another 3.4-sigma anomaly that is also related to the top quarks and that is also consistent with a heavy gluon explanation. ;-)


As Jester explains in some detail, there is an excess of events in the graph below. 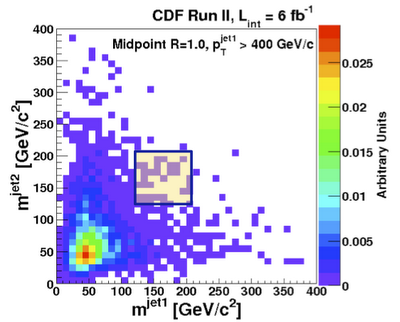 The graph shows the number of events with two jets with a high transverse momentum. In the highlighted square where the invariant masses of both jets are near the top quark mass or 170 GeV, the number of events is as much as three times higher than what is predicted by the Standard Model.

Although the discrepancy seems convincing in the picture above, Jester suggests that the CDF folks try to conservatively hide it by focusing on a slightly different, semileptonic events only - where a slight deficit replaces the significant excess above.

An anonymous reader points out another, 3-jet channel at the CDF that also seems to have an anomaly near the top quark mass.

The LHC - which will resume collecting the data in early March - should have no problems to see the underlying physics of those anomalies if the cause is new physics. In fact, I am a bit puzzled why it cannot address those claims yet. Of course, Randall-Sundrum models producing new physics near the top quark mass would be a complete shock not only to me but perhaps even to Lisa. ;-)

Matti has a relevant blog entry in which he also points out a TDG-endorsed :-) paper that describes the newest effect as an R-parity-violating decay of a light gluino.
Luboš Motl v 8:48 PM
Share