Long-time Czech IPCC boss: adaptation to 11 °F of warming wouldn't be a problem 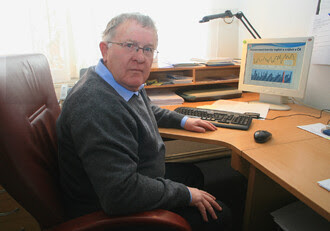 Dr Jan Pretel is the director of the Climate Change Department of the Czech Hydrometeorological Institute. For years, until August 2009, he was the top Czech representative in the IPCC; he is as mainstream as you can get (at least in Czechia).

In the newest interview for Ekolist.CZ ("Ecopaper"), he explains that climate mitigation plans are nonsensical:

First, he is asked what he imagines under the term "climate change". He says that it's a fallacy to attribute e.g. traffic accidents to the climate change - the weather is the culprit - and it's nonsense to talk about catastrophes e.g. in the Czech context where they can't occur. The tropical zone requires a closer scrutiny.


Dr Pretel says that there has been a trend in the recent 50 years but changes have always existed. He thinks it's very likely that they used to be slower than today but he emphasizes that the probabilistic nature of the comment is essential because no measurements from the distant past are available.

He says that most likely, humans are making a contribution to these temperature changes, but their contribution doesn't boil down to the greenhouse effect only. There are other changes of the radiation budget. Pretel argues that one can't dispute the thermometer readings; however, there's uncertainty about the comparisons of the present and the climate that existed millennia ago.

The climatologist is asked about the distant future - 100 years. The most violent predictions envision a 11 °F of warming. He says that those things can't be predicted due to uncertainties, including the unknown impact of water vapor on the atmosphere, unpredictable human decisions to cut the tropical forests, speed of propagation of nuclear power and depletion of fossil fuels, and others.

In the following two decades, he personally expects a warming by 0.35 °F per decade.

Pretel says that the term "global warming" was misleading because it suggested that the temperature was increasing every year which, as we know today, isn't the case, of course. To remind us that he's still an IPCC veteran, he attributes melting Swiss glaciers to "climate change". In the Czech Republic, temperature was increasing by 0.5 °F per decade in the last 50 years and the seasonal profile of precipitation was changing a bit in interesting ways.

Changes in the water cycle can be noticed but they have many factors that cause them. They discuss extremes whose frequency may be changing. That's another part of the interview which could classify him as a worrier.

Finally, they get to the issue of mitigation. Pretel says that years ago, he wanted to regulate the carbon. During the years, he has changed his mind. To reduce emissions by 20-30% by 2020 or by 80% by 2050 in order to "save" the climate is essentially nonsense, he literally says.

The goals are impossible to be achieved in the real world and because of the long timescales that are involved, such a plan couldn't be verified, either. Even the countries that were paying lip service to the carbon regulation weren't fulfilling their commitments, we're told. The countries where emissions began to drop only represent 15% of the world emissions so this strategy is not going anywhere.

Even if emissions were reduced by X percent, a measurable impact could only be seen around the year 2050, Pretel adds. Moreover, no one knows whether anything in the world would improve. The focus must be on adaptation. In other words, Dr Pretel doesn't care whether the temperature increases by 2 °F or 11 °F. Instead, we should be interested what kind of trouble it could cause to us here, he says. It's impossible to fight climate change globally; one must adapt locally.

The journalist conjectures that most countries still claim that carbon emissions have to be reduced. He reminds Dr Pretel of his recent proclamation that "the representatives of the Czech environment ministry are only capable to read 20-page summaries before they travel to the climate summits". Pretel confirms he said it because it's true. However, he adds, the folks at the United Nations wouldn't be happy to hear his words, either.

Dr Pretel is then offered a rumor that Dr Pretel was fired as the Czech representative in the IPCC by the ministry (when it was still controlled by the fundamentalist Green Party - a party that was forced away from the Parliament by the 2010 elections) because he dared to criticize attempts of the Union of Czech Greenpeace and the Micronesian Savages to sue a Czech power plant for its plans to sink an island that is 13,000 km away by a chimney (a lawsuit of the kind that was envisioned in Michael Crichton's State of Fear). Pretel implicitly confirms the rumor and says that indeed, it was the last droplet but he would like to forget about the story.

The journalist asks Dr Pretel whether a moral of the story is that the organizations similar to Greenpeace don't hesitate to manipulate with the facts. Pretel says that the answer is unquestionably Yes, they don't hesitate.

Why is there so much ideology, arguments, accusations, and politicization when it comes to climate change? Pretel says that it's partly because of the large amounts of money behind this business. In particular, the system doesn't work: when the main Czech Power Utility (ČEZ) needed extra carbon permits, they simply threatened that they would be forced to raise the energy prices. So they received extra permits. It's a damn good business for the business circles, Pretel says.

Pretel is asked what was achieved in Cancún two months ago or so. The answer is nothing. They only agreed that they wanted to meet again. It became clear that mitigation plans are getting superseded by adaptation plans. He agrees with the interpretation that it's time to stop fighting emissions; instead, it's time to return to the construction of protective levees.

As far as Dr Pretel can see, even the EU is marching towards adaptation as the preferred policy. He says that the old Czech preference of adaptation was humiliated when we were the EU newbies who "shouldn't have had opinions about anything" but the EU ultimately admitted we were right. Moreover, different countries face different challenges.

The climatologist is asked to evaluate President Klaus's attitudes. He disagrees with Klaus's "arrogant" denial of the temperature changes in the past - but he agrees with him about the solutions. In recent two years, Klaus's opinions became more compatible with his own even when it comes to the description of climatology itself, Dr Pretel adds.

The climatologist doesn't know what people say in the pubs - perhaps what they say in the public lectures - but Dr Klaus has already said so many things about the climate that, according to Dr Pretel, people are ignoring much of it these days.

In the comment section under the Ekolist.cz interview, Mr Jan Rovenský, a childhood friend of mine and the boss of the Czech Greenpeace's AGW Jihad Department, asked whether Dr Pretel really believed that the mankind may adapt to 11 °F of warming and it would be cheaper than the mitigation. Does Dr Pretel disagree with the Stern Report?

Dr Pretel answers Yes, he would almost say that he believes that. The mankind may adapt to it and what would be cheaper depends on the way how the things are calculated. According to Dr Pretel - and President Klaus - Nicholas Stern's treatment of the discount rate is deeply flawed. Depending on the method how you treat the distant future costs, you may get one predetermined result or the other.

Dr Pretel also says he realizes that The Copenhagen Diagnosis, an alarmist document, was "strongly politically motivated". Dr Pretel explains that it was written before the Copenhagen conference by some scientists who wanted to push politicians towards some specific political decisions. Dr Pretel says that he personally knows three of the authors of The Copenhagen Diagnosis and they are driven by an "ultimate political bias" whose color is intimately known to Dr Pretel so he couldn't even be surprised that the document turned out to be what it was.

Hat tip: Alexander Ač (a hired gun in the EUR 25 million "Czech Globe" project who has immediately declared Jan Pretel to be another heretic and denier)
Luboš Motl v 9:07 AM
Share