Just two months ago, I warned that the EU econazis were buying 150 Czech crackpots and traitors for 25 million euros. The goal of the hired guns would be to spread fear and misinformation about the climate.


As Viernes Luz and Juraj Vanovcan have pointed out to me, the group already started to do harm.


Sure, Europe suddenly runs short of water. Holy cow. The group of people was simply bought to publish junk of this kind. In particular, Mr Michael Marek is no "top climate expert". He's a 100% corrupt average scientist who doesn't have a single well-known publication and who was more than eager to accept the pay from foreign powers to produce lies designed to hurt the Czech economy.


If this is not treason, what is treason?

All the participants of the shameful CzechGlobe movement deserve at least life in prison. 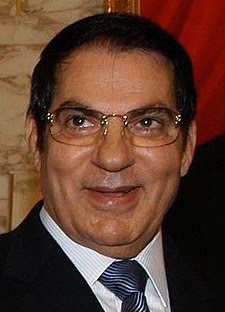 This guy is already finished. I have been to Tunisia twice - most recently in 2008 - and the picture of Ben Ali could be seen at many places. While we may praise him for keeping Tunisia a police state that was safe for tourists like ourselves, this Gentleman was clearly an unbelievably corrupt thief.

His reign that began in 1987 seemed to be neverending and he was feeling so safe. However, on January 14th, 2011, he was forced to resign, flee to Saudi Arabia, and Tunisia issued arrest warrant for Ben Ali a few minutes ago. If the thugs in CzechGlobe really want to forecast the future, they should think about their own future, and the likes of Saddam Hussein and Ben Ali are good templates for what they can expect.
Luboš Motl v 9:30 AM
Share