Hansen: Chinese communists have to lead and save humanity, beat the U.S.

James Hansen's personal website is among the web pages that I visit approximately once a month. But I managed to completely miss his remarkable op-ed in some Chinese newspapers.

Marc Morano and the Haunting the Library blog has brought my attention to this November 2010 op-ed. Here it is: 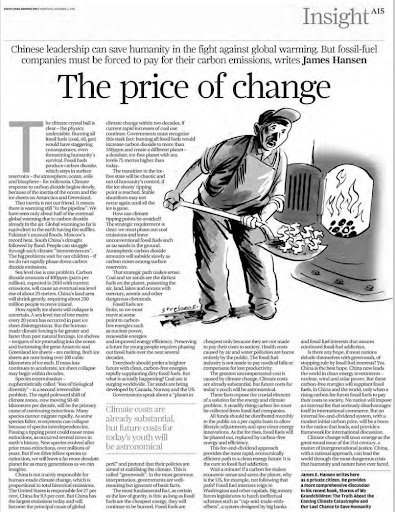 Click the image above to zoom it in or see the PDF file.


We learn that the Chinese communists may save humanity in the fight against climate change. After the usual psychiatric stream of fearmongering, tipping points, warmings waiting in the pipelines, and collapsing ice sheets, we are told that the U.S. don't work and the Chinese totalitarian system is the world's best hope.

The American readers were offered a follow-up article called


China and the Barbarians: Part 1

Needless to say, the people who are not communists are the barbarians - and the author presents a silly historical analogy. Hansen argues that democracy as intended in 1776 would deal with climate change but contemporary Washington D.C. is controlled by fossil-money-'democracy' including the quotation marks. The comment about the birth of the U.S. is absurd; the basic laws of the U.S. were designed exactly to protect the newborn country from people similar to James Hansen who try to cripple the individual rights by inventing a "bigger force".

But let us return to Hansen's reasoning. Because the U.S. 'democracy' is controlled by the fossil fuels, China (that probably doesn't use any fossil fuels) has to supersede America and lead the world through the most dangerous crisis that the humanity ever faced, as the original op-ed claimed in the conclusions. ;-)

Amusingly enough, Hansen recommends China to impose tariffs for imports from the U.S. This is funny: it's enough to compare the U.S. exports to China and the Chinese exports to the U.S. to see which of these exports would be more affected by a trade war Hansen wants to start.

Moreover, the moral justification of such a Chinese "trade attack" is clearly non-existent because China produces much more of the "lethal gas carbon gas" per produced dollar than the U.S. The only reason why Hansen is much closer to the Chinese than the American government is that he is comparably obsessed with the desire to undemocratically control millions (or a billion) of people. From a broader viewpoint, whether the totalitarian system chooses red, green, or brown color is a detail.

All of us know that James Hansen is a psychopath but the most obvious question that many of us were probably asking after we have read these incredible texts is whether Hansen has committed treason. I don't have any sharp answer, and even if I had one, my lack of any official education in legal matters would make degrade my opinion to a personal one.

In the U.S., treason is the only crime that is directly defined by the U.S. constitution. The most important legal document says:


Treason against the United States, shall consist only in levying War against them, or in adhering to their Enemies, giving them Aid and Comfort. No Person shall be convicted of Treason unless on the Testimony of two Witnesses to the same overt Act, or on Confession in open Court. The Congress shall have Power to declare the Punishment of Treason, but no Attainder of Treason shall work Corruption of Blood, or Forfeiture except during the Life of the Person attainted.

Well, I don't know whether these words apply to Hansen's deeds. They may say that Hansen is innocent simply because there's no "war" between America and China.

However, the constitutional definition has been complemented by various statuses such as sedition in the 1798 Alien and Sedition Acts, or espionage and sedition in the 1917 Espionage Act, which do not require the testimony of two witnesses and have a much broader definition than Article Three treason. For example, some well-known spies have been convicted of espionage rather than treason. (This text was copied from Wikipedia.)

It's a complicated stuff but I do think that people should start to discuss these serious matters - what kind of crimes is or may be actually committed in similar situations. Hansen's op-ed is probably totally OK and is probably protected by the First Amendment; however, all of us should probably get more familiar with the constitution and other laws because it is very likely that a treacherous op-ed supporting a major totalitarian party's desire to overshadow the Western democracy is not the last act that we may expect from uncontrollably unhinged lunatics of Hansen's caliber.