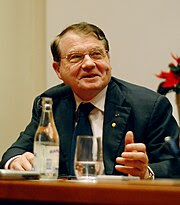 The "HIV deniers" - who don't believe that there is a link between AIDS and the HIV virus - belong among the wacky groups in science.

However, it is not hard to acquire some doubts who is more crazy if you look at the latest preprint co-authored by Luc Montagnier, a co-winner of the 2008 Nobel medicine prize. His group had co-discovered the HIV virus - independently of Robert Gallo's group.

The preprint by (the other) L.M. and five co-authors is called

The abstract looks pretty innocent: DNA molecules send some low-frequency electromagnetic waves through water. Very strange but strange things can sometimes take place. In the paper itself, it's argued that these waves could help to cure AIDS. It's a comparably bolder statement but there's nothing wrong about statements just because they are bold.


However, some responses and interpretations are even more incredible. Nude Socialist claims that the authors support the idea that the DNA can teleport itself at a long distance. To prove that Nude Socialist is not the only outlet that produces 99+ percent of complete rubbish about science, its interpretation was also parroted by SlashDot Science.

See other responses at Google News: some of them are a little bit saner.

Now, there's a lot of confusion over here. First, it is extremely likely that all reproduction of RNA and DNA is composed of processes that occur at distance scales comparable to the thickness of the DNA molecule itself. The bases get their friends and the two helixes in the double-helixes may become full-fledged double-helixes again. This process is "classical" - it's just a "classical" information about the bases that may be copied.

It seems very inconceivable that there exists a mechanism to copy the genetic information that would allow the distances to be vastly greater. The laws of physics don't seem to allow the dependence of distant processes on the detailed identity and ordering of the bases. At the same moment, such a "remote reproduction" of DNA seems completely unnecessary for life, too.

I don't think that this is what L.M. et al. are claiming because the DNA keeps on living.

Also, if there were a process that could reproduce the exact quantum state of the DNA molecule, and not just some bits (encoded in the genetic code) obtained by a particular measurements, it wouldn't be called "quantum teleportation" but rather "quantum xeroxing". But quantum xeroxing is impossible due to the linearity of quantum mechanics. If the state "psi" could be copied into two objects in the same state, the state of the two objects would be "psi ⊗ psi" where "⊗" i.e. "otimes" is the tensor product sign. But such a map is quadratic, not linear, while all evolution in quantum mechanics - i.e. everywhere in our world - has to be linear.

I don't have the feeling that the preprint tries to argue that the exact state of the DNA molecule is exactly reproduced - which is silly for the reasons above. Let's assume that they don't claim that. They could still claim that the detailed classical information stored in the DNA could manifest itself remotely via the electromagnetic wave.

For obvious reasons, if the wavelength of the electromagnetic waves is (much) longer than the size of the bases, it's pretty much impossible that these waves can "see" the detailed identity and ordering of the bases. Among the electromagnetic waves, only X-rays have a sufficient frequency to "see" the internal structure of the DNA. But the authors talk about the frequency of 7 Hz - whose wavelength is not far from the circumference of the Earth. That's a bit bigger than the DNA bases. ;-)

It's my feeling that I have heard about this 7 Hz - or 4 Hz - "frequency of the Earth and everything" during a recent party in Belgrade. :-)

If I read the paper, it doesn't make much sense to me and I would probably silently approve the statement that the French Nobelist has gone senile. But I must admit that the interpretations in the media are even wilder than the preprint. The paper's actual main statement seems more modest - that the low-frequency radiation is emitted by bacterial or viral (i.e. harmful) DNA - not any DNA. It's still bizarre why the radiation shouldn't be emitted by any DNA, including the "good one" haha, and the very ludicrously small frequency that is being attributed to the DNA is strange by itself - but less strange than the teleportation claims.

L.M. went to study his new miraculous effect to ... China where he got the freedom (and money?) to establish an institute. ;-)