With some help from her assistant, namely her father, the not-so-overaged astronomer was comparing two images taken at two different times, including December 31st, 2010, to see a point that blinks.

The journalist asked her what she was planning to discover next and the modest explorer answered that she just wanted to find additional supernovae. But there comes a time when the stargazer becomes mature enough to look for cosmic strings or join Sheldon Cooper's expedition to find the magnetic monopoles. ;-)

We could hear the host as saying that the supernova exploded "thousands of light years" from the Earth. Well, while the TV puppets like to say that the life on Earth goes extinct if the temperature increases by a Celsius degree, they apparently fail to realize that a supernova that would explode "thousands of light years" from us could hurt some of us. 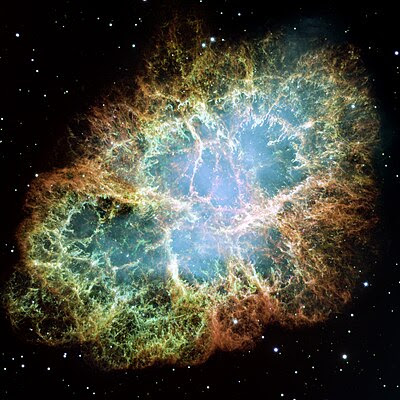 A gamma ray burst anywhere in our Galaxy would kill all life on Earth; the same would be true for a regular supernova that would explode dozens of light years from the Earth. The Chinese astronomers observed a supernova in 1054; its remnant is the Crab Nebula - see the picture above. Its distance is 6,300 light years which is the closest recorded supernova in history. Betelgeuse at 400 light years and Antares at 600 light years are the closest "looming" supernova candidates.