Tevatron will shut down in September


Very sad. Tevatron will be turned off at end of year. All eyes on LHC for Higgs discovery and more. Good news is that LHC doing great.

BBC News were the first outlet to report that the plans to extend the Fermilab's collider lifetime were abandoned for budgetary reasons. 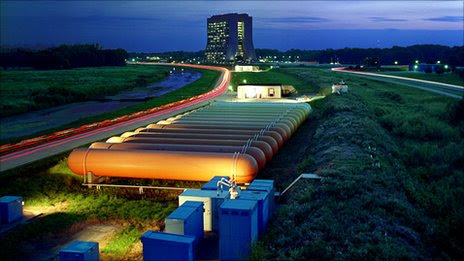 Dozens of other sources followed.

It may be sad but I think it's a good decision from a physics or budgetary viewpoint. The official letter from DOE - that decided - to the Fermilab sounds sensible to me.

The Tevatron is still better than the LHC in a very limited set of "disciplines". It might have told us more about some below-120-GeV physics (such as the Higgs) if it exists. However, for any physics that exceeds this bound, the Tevatron doesn't compete.

Also, there are some artifacts of the Tevatron architecture that can't be mimicked by the LHC. Because the American collider collides protons and antiprotons, it may distinguish two directions of the beam and study e.g. the top-antitop asymmetry. The most straightforward translation of this asymmetry at the LHC is simply zero - regardless of any detailed laws of particle physics - because the European collider smashes two identical proton beams.

However, all such signals and hints always remain questionable - there's always a possibility that they're flukes or errors - and their interpretation remains completely unknown. To see the actual culprits of any such hints, even if they're real, more energy is needed. We simply need to produce the new particles if they exist and the Tevatron can't do it.

If you look at today's CMS preprint about the new supersymmetry exclusion limits, the graphs won't leave any doubts that the LHC's capacity is greater by several categories. The Tevatron could just address a few islands in the parameter space; the LHC can deal with whole continents. Even if the Tevatron were running for many years, it couldn't even reproduce what the LHC has already done.

The Tevatron has served well since 1983 - yes, for 28 years. It's been upgraded several times and has discovered a couple of things such as the top quark, aside from many other things that are not just "new particles" - various things in strange and B-physics.

The collider and its people should be thanked for their services but the progress has to continue. The American collider is no longer competitive today, even if some people are eager to describe this fact in a misleading, politically correct way. And America is deeply in debt and has no good reason to throw too much money away; however, this apparently doesn't apply to the science of man-made climate disruption that was given $2.5 billion for the year 2011. Holy cow.

Nevertheless, the Tevatron has eight more months of life. It may still surprise it. Its experience - I mean the data it has already acquired - remain its most important comparative advantage.
Luboš Motl v 9:17 AM
Share