ATLAS: gluino mass not below 700 GeV if equal to squark masses

In December 2010, the CMS collaboration at the LHC released its bounds on supersymmetry:


The ATLAS collaboration is larger than the CMS so we shouldn't be surprised that it may take a longer time for them to collect signatures of all the members (whose names occupy most of the paper). 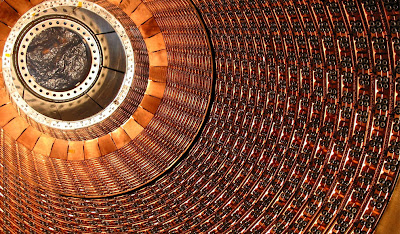 It's here. The ATLAS collaboration has evaluated the very same integrated luminosity as the CMS did - 35 inverse picobarns (they must have an agreement to correlate those things) and the result of their work is here:


They declare that they have improved the limits by CDF, D0, as well as the recent limits set by their LHC colleagues in the CMS collaboration. ;-)

For a vanishing cubic coupling A_0, positive mu, and tan(beta)=3, and assuming mSUGRA with squark and gluino masses set equal, the upper 95% confidence level limit on the gluino masses is 700 GeV.


Those expectations are somewhat contradictory to what is considered "realistic" in the current phenomenological literature - which has already been shaped by the older experimental data. In particular, tan(beta) is more likely to be 10 - with some hints that it could be above 40, after all. A_0 is much more likely to be strongly negative - the Indian supersymmetric island indicated minus 1 TeV or so. And some squarks are likely to be several times lighter than the gluino.

But they had to assume something and the paper surely shows the powerful discovery potential of the LHC collider that has already overshadowed the Tevatron. The Tevatron is still producing interesting results but when it comes to direct SUSY searches - and other searches for new physics - the U.S. collider would have no chance even to reproduce what the LHC has already done, even if the Tevatron were running for many additional years.

The LHC is getting closer to the regime a priori expected to be relevant for SUSY - e.g. gluino masses near 1 TeV.
Luboš Motl v 9:38 PM
Share