The Big Bang Theory is always a lot of intelligent fun but the newest episode 04x15, The Benefactor Factor, was also addressing a serious topic, namely the funding of science.

The president of the university met the boys in the cafeteria and he told them about a fundraising party. Sheldon reacted in a way that explains why I identify with him so much: he won't be affected by down-to-Earth drivers such as finances in his quest to see the face of God. 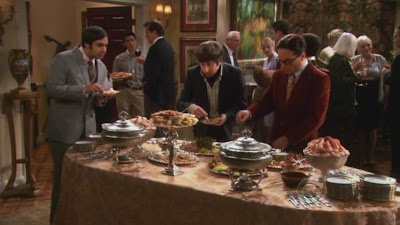 So only the three boys went to the fancy party. When they met an arrogant but powerful woman, Howard had to disappear after she attacked him for his not being a doctor; Leonard began to stutter about a coffee machine; and Rajesh who can't speak to women had to escape, too. The lady later revealed that she enjoys giving a hard time to smart people - one of the things that wealthy bitches such as herself enjoy to do. Very true.


Meanwhile, Sheldon had a video call with his friend, Amy, who told him some cold facts about the real world. Until his mind is uploaded to a safe spaceship, he will have to depend on other members of the human species. After all, her own lab is funded by a Middle East dilettante, a prince who is technically her fiancé.

Moreover, she tells Sheldon that his friends are not capable to make a good job in defending the funding of physics. So the money could go to the geology department - the "dirt people", as Sheldon calls them - or something even worse: they could even end up in the humanities.

Now, Sheldon is as much horrified as your humble correspondent by the horror of the millions of dollars that flow to the gender studies and similar ultrasoft disciplines.

While the lady bitch is torturing the three guys, Sheldon arrives at the fundraiser. He tells the important people that he won't touch their hands and transfer their germs: instead, he honestly tells them that he has come only for their money. ;-)

On the following day, the president of the university calls Sheldon and gives him an incoherent message whether he wanted Sheldon to attend or not. Of course, Sheldon can't understand those things. I can't understand them, either. The money is the main point of similar fundraisers and everyone knows that. However, almost everyone got used to an amazing degree of hypocrisy so everyone denies the previous sentence - and the more hypocrisy one exposes, the better. Such things bother me as much as they bother Sheldon. At the end of the call, Sheldon encourages the president to organize his thoughts a little bit and try to call Sheldon later.

The rich bitch calls Sheldon and tells Leonard that he will be sent a car for a dinner. Leonard feels somewhat uncomfortable in the car. The rich bitch, who inherited her wealth from her husband, explains that she was dating a smart guy in the college who didn't have the money. That makes Leonard ask about the money for the physics department and she says that she will bring the idea to the next level - which means to kiss Leonard penetratingly.

So the trade is for the department to receive millions for a cryogenic centrifugal pump while Leonard would have sex with her - a thing that disgusts Leonard while Howard is jealous. :-) The lady wants to see Leonard again. So Sheldon tries to find out what Leonard should wear; the expert is Penny who knows something about trading sexual favors for material gains. :-)

Leonard doesn't want to sleep with her while Sheldon tells him that it may be Leonard's only chance to make a real contribution to science. :-) Fortunately, the lady tells Leonard that she's giving the money to the physics department regardless of the development of her romantic relationship with Leonard.

However, it turns out that she is also able to convince Leonard to change his mind: you know, she's that good. The following scenes have to be skipped on TRF which is more decent than CBS - where they were skipped, too. "Good morning, slut," is what Penny rightfully tells Leonard in the morning. Sheldon is proud about Leonard who is ashamed. Leonard reveals that she paid first and Sheldon admits that Leonard is a talented soldier of science. There are lots of other rich ladies around and we need a new linear particle accelerator. :-)

The president makes Leonard a hero of the cafeteria. Leonard objects that he didn't do it for the money. The president says that it's a good idea for Leonard to think in this way; the president himself knows quite something about it. Well, in this respect, he is surely not exceptional among the university presidents.
Luboš Motl v 11:18 AM
Share