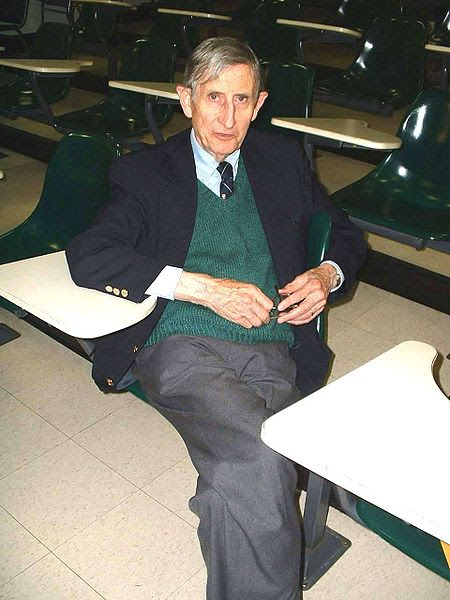 I took this picture at Harvard...

At the end, I decided to read the whole interview with Freeman Dyson because Sarah Kavassalis has tweeted that it was far more dramatic than she expected. ;-) I recommend you to do the same thing:


Letters to a heretic: An email conversation with climate change sceptic Professor Freeman Dyson (The Independent)

The name of the brainwashed alarmist journalist who was "interviewing" Freeman Dyson is Steve Connor (different verbs could be more accurate and some of these better verbs will be mentioned). If I put it very politely, Connor is a pushy as$höle, indeed.

At the beginning, Connor asks seven general questions of the type "what you believe about the AGW orthodoxy" to Dyson. Dyson answers and explains all of them.

Needless to say, Connor is not satisfied.


So he tries to overwhelm Dyson with references to deluded political organizations of scientists, comments that heretics have to be wrong, and he tries to press him to endorse the "scientific consensus". While doing so, Connor writes the word sceptics in quotation marks all the time.

Despite this massive bullying, Dyson obviously doesn't surrender (if he were controlled by others, he wouldn't be a Free_man) and he insists that the answers to the questions are uncertain and the questions themselves are unimportant - or at least vastly less important than the wide range of questions that Dyson is interested in. Dyson acknowledges that Connor couldn't possibly change his opinion - something that Connor declares pretty openly - but Dyson at least expects Connor... to listen. What a sin!

Needless to say, Connor doesn't listen and doesn't change his priorities, either, so he continues in his attempts to intimidate Dyson and indefinitely repeats the Gore-like idiotic AGW propaganda mixed with ad hominem attacks against skeptics and skepticism as a principle. He also incredibly claims that Wegener didn't have convincing arguments for continental drift when he proposed it - which is just a historical lie invented by the stupid would-be geologists who failed to understand - sometimes for decades - how essential and indisputable Wegener's insights were and who decided that they were so numerous that they could rewrite the history.

In reality, Wegener knew and clearly stated almost all the main currently known arguments that de facto settle the question whether the continents were arranged differently in the past. By the way, Dyson mentions that he was taught as early as in the 1930s that Wegener's theory was a fact - an educational episode that helps to show that the "consensus" against Wegener only existed within a particular clique or a particular "hockey team" of the 1930s.

Connor asks Dyson where the trapped heat has gone. Dyson answers that he disagrees with the assumption that there was a trapped heat in the first place so he can't say any additional stories about this non-existent heat. It's a perfect answer but Connor is "sorry that Dyson feels this way." Holy crap, how can an interviewer feel sorry if Dyson is just answering his question?

Much like your humble correspondent, Dyson prefers to reply e-mail immediately whenever possible - an attitude that is unsustainable in such remote interviews, as Dyson figures out. So he answers and promises a 3-day break. During the break, Connor floods Dyson with another repetition of all this moronic propaganda about the "consensus" and AGW-driven disasters. It really looks like Connor's brain is incapable of absorbing more than this kilobyte of stinky rubbish; he's just completely full of this $hit.

Dyson's friendly summary is that he hopes that Connor will once join the skeptics because skepticism is important both for science and for journalism. Is skepticism important? Well, Connor replies that he is sorry that Dyson feels this way - no kidding.

I guess that Freeman Dyson has to face many more complete and fanatical idiots who want to "debate" him - in particular, bully him - than what would make Dyson feel comfortable. I know such things, too. When whole websites designed to synchronize complete idiots decide that they (and their sockpuppets) will try and go to spam both comment threads on this blog by totally idiotic rubbish that has been debunked in quite some detail hundreds of times in the past, combined with personal attacks against me and other skeptics, it is obvious that the only way to prevent this blog from becoming a cesspool or another Real Climate is to ban all those pushy idiots.

It's just amazing what those alarmist cranks must be thinking about themselves. It would be logical if Dyson were asked to give a lecture to Connor or something of this sort. But Connor doesn't see it this way. Instead, Connor is convinced that he can teach Dyson. Why? Because there are tens of thousands of mental cripples of Connor's type which is a consensus and a consensus means that they're intellectually superior relatively to Freeman Dyson. You know, I am not among those who would repeat clichés about Dyson's being another Einstein - but it's just a fact that Dyson has no peers in the field of climate science.

I just can't stand these arrogant limited jerks. Steve Connor, John Cook, Dana1991 are not the real deal, can you please understand it? You're just a bunch of brainwashed crackpots, Gentlemen. You can't expect to debate Freeman Dyson as a peer. You're idiots who think that the Earth doesn't thermally radiate during daytime. You're idiots who think that the tropical troposphere has to be warming by 5 degrees per century because of some silly quasi-argument about water even though the experiments clearly show that it's warming at least 1 order of magnitude more slowly.

How can we explain to those idiots that they should be listening and they should be humble because they know nothing about science? This is really the main meta-message in this whole issue.
Luboš Motl v 11:30 AM
Share