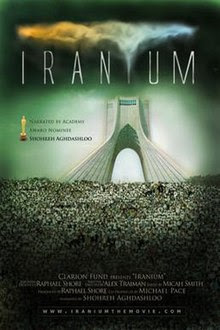 I recommend the U.S. and other readers who are interested in the Middle East to watch Iranium, a 60-minute movie by pro-democratic Persian folks and conservative pundits:


It presents a rather convincing case for the opinion that as a potential owner of the nuclear weapons, Iran represents a qualitatively graver threat than any previous country that became a nuclear power.

The story starts in the 1960s and 1970s when Iran was the most civilized country of the Muslim world. Of course, it was the time when it was governed by the king of kings, the Shah, who was leading the Persian nation to the place where it once belonged - a nation that was critical for the progress of the human civilization - the same civilization that has gradually transformed to the "Western one".

I was about 5-6 years old when Mohammad Reza Pahlavi was overthrown. At that age, I didn't really understand politics too well (as a first-grader, I bought the friendly pro-Soviet propaganda, and I only became an anti-communist dissident around the age of 8 or so haha) but I do remember that the name of Pahlavi (which sounds like "pohlaví" in Czech, a formal word for sex) and later Khomeini (a very different cup of tea) would appear on TV very frequently.


The Islamic revolution would be totally non-nationalist, fully driven by the religious fanaticism. The movie explains how Iran has been nurturing terrorist organizations across the world. Some scary pictures of officially supported mobs screaming "death to America" and Iranian leaders who say really tough things are sketched, much like possible methods how the regime could destroy the U.S. cities: nuclear bombs in cargo ships, luggages, and electromagnetic pulse above the U.S.

Mutual assured destruction doesn't work as a deterrent for them; in fact, it is a catalyst because those religious loons are obsessed by the idea of a doomsday and destruction in which the final struggle between the believers and infidels will divide the people to the heaven and to the hell. The Islamists are like global warming alarmists on steroids, I add. Some pundits explain that it is not necessary to distinguish radical Islam from the "moderate one" because 5-10 percent of the Muslims are inevitably ready to sacrifice their lives etc. and it's still a huge mass of tens of millions of people who are eager to destroy anything for their medieval divinity.

It's time to combine tough sanctions and credible military power to stop the insane regime before it will become much more expensive to be saving the civilization, they conclude.

Meanwhile, Muammar Gaddafi has killed hundreds of protesters - which is very different from Hosni Mubarak who essentially didn't deliberately harm anyone. Nevertheless, the "mainstream media" are much less eager to criticize Gaddafi because he's a socialist much like almost all of them.

But some rumors, denied by Venezuela, claim that Gaddafi has fled the country, after he ordered his army to bomb the protesters. Some pilots refused and deserted, some of them to Malta, the second largest city was taken by the protesters etc. - it's a possibly emerging civil war (which may end very soon, however).

Similar protests appear in many other Arab countries - the shared language is the main reason that makes them act in the same way, despite different environments and political elites.
Luboš Motl v 10:14 PM
Share