The North Magnetic Pole is the place on Earth where the magnetic field has a vertical direction.

This place doesn't coincide with the Geographic North Pole, linked to the axis of the Earth's spin. Because the Earth doesn't carry any significant electric charge, there's no God-given law that the two types of poles have to coincide. And in fact, the relative orientation is changing with time. 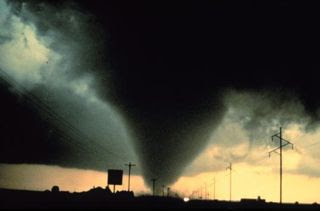 
in which it is claimed that the motion of the North Magnetic Pole towards Russia sped up from 8 km per year to 60 km per year in recent years (from 1989 or so) and that storms similar to the (technical) Category 6 cyclone Yasi may flood the whole Earth because of the looming or ongoing reversal, bringing us 500 km/h winds all over the world. Nice. ;-)

The reversals are usually relatively rapid. Here you have the graph showing the recent 5 million years.

The present era is found at the top and it is black which means "the same direction of the magnetic field as we have experienced so far". The opposite orientation, denoted by white bars, was most recently seen 0.78 million years ago.

The latest reversal, the Brunhes-Matuyama reversal, took something between 1,200 and 10,000 years, depending on the location where the apparent duration was measured. So when I say "rapid", you shouldn't imagine "a few years". But I would actually guess that the shorter duration is more likely to be right - and the longer one is just due to errors in measurements and diffused proxies.

A year ago, National Geographic attributed the recent changes to some "plumes" emerging from the deeper core closer to the surface.

I can't predict whether the magnetic pole will switch the direction in coming years or centuries - and how quickly. But do I believe that it will bring us Yasi-like superstorms? Well, I don't. I even suspect that the authors of that text could have confused tropical storms with geomagnetic storms whose essence is not linked to the climate at all and that are caused by space weather rather than internal changes of the Earth's core.

However, it's obvious that even changes of the magnetic field - that may be faster than in recent millennia (and maybe not because the changes haven't been observed for too long) - may add their contribution to the tenths of a degree of temperature change that the globe is experiencing.

While the article about Yasi-like superstorms all over the world is alarmist in character, at least it doesn't urge us to ritually sacrifice power plants. ;-)