AFP and many others have just announced the newly discovered answer to the old and well-known question:


Where does the mysterious intelligence residing in Mona Lisa's smile come from?

Thousands of women have been painted but none of them comes so many standard deviation from the average. Where did her special smile originate?

The answer by Silvano Vinceti, the boss of Italian national heritage committee, is as simple as ingenious answers often like to be: Mona Lisa was actually a man. ;-) It's not hard to see that Vinceti is almost certainly right: 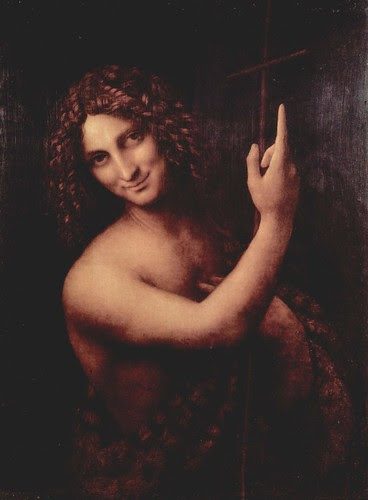 This is Salai as John the Baptist. Salai was a nickname of gay Leonardo da Vinci's gay lover, Gian Giacomo Caprotti.

His similarity to Ms Mona Lisa is hard to hide: Besides the similar mouths and noses, Vincetti also points out that the eyes of Mona Lisa hide two letters, "L" and "S" which stand for "Leonardo" and "Salai" - a statement rejected by the officials in Louvre that possesses the picture of Mr Mona Lisa. ;-)

(I saw it two years ago, Louvre is amazing.) 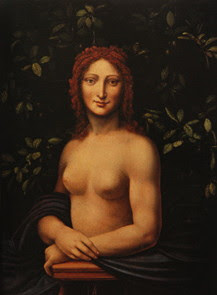 Unless Caprotti was a very unrealistic painter, Monna Vanna seems to be much less similar to Mona Lisa than Caprotti himself. Monna Vanna has much sharper nose than Mona Lisa, to mention one difference, and her shoulders and bicepses actually look more masculine than those of Caprotti (or Mona Lisa, for that matter).

To be even more accurate, I am convinced that Monna Vanna has a much higher protein-to-fat ratio than Mona Lisa or Caprotti. :-)