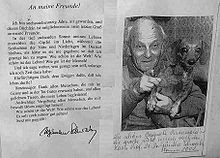 We often think about environmentalism as a left-wing ideology. However, the mass-organized environmentalism can only be invariantly identified as a totalitarian ideology; whether it is left-wing or right-wing is somewhat flexible.

In the article The Roots of Environmentalism, I have discussed some aspects of the environmentalist obsession of the German Nazis. An hour ago, Ron de Haan just posted a link to a fascinating article by Mark Musser written for the American Thinker,

The first book that defended the idea of a catastrophe caused by carbon dioxide was written by Günther Schwab, an Austrian Nazi and environmentalist.


The book is fully available to TRF readers for free here:


Please ignore the Jesus symbols on the website above; the book, originally called "Der Tanz mit dem Teufel" and based on Goethe's Faustian theme, has really nothing to do with Jesus in His prevailing incarnations.

Schwab was born in our capital, Prague, in 1904, and died in Salzburg in 2006: yes, he has lived for 102 years. This member of the Nazi party was the founder of the World Union for Protection of Life. If you read Mark Musser's biography written for the American Thinker, you will see how his life harmoniously combines eugenics and the worries about the population bomb; from this perspective, they're really the same thing.

Most importantly, as we have mentioned, it's the book that pioneered the concept of a man-made global warming catastrophe, driven by the doubling of the carbon dioxide concentration. Open Chapter 3 and you will see the following:


"... If the present rate of industrializa­tion continues, then in a hundred years' time the air will contain twice the present quantity of carbon dioxide."

"And what do you expect from that?" asked Sten.

"A great many kinds of plants that are necessary for human life will simply die out. There will be more sickness, both for man and beast; harvests will grow smaller, and the quality of food will deteriorate. The carbon dioxide in the air will absorb and hold fast the warmth given out by the earth. This will cause the climate to become milder and the Polar ice will begin to thaw. As a result, there will be a rise in the level of the ocean and whole continents will be flooded."

The Devil turned to his visitors. "As you can see, we are ensuring that the seeds of Death in the air will be in plentiful supply."

"Why seeds of Death?" said the girl.

The people who believe that there is a climate threat must admit that this Nazi writer was a true visionary: in 1958, he wrote a book whose content is identical to the IPCC's summary for policymakers combined with all the catastrophic books and movies that all the contemporary climate cranks have produced. They have really made no intellectual progress whatsoever in those 53 years. Whole continents are flooded by the rising sea level, people are sick, plants die.

A little girl played an essential role in the story, much like she always does in the Nazi and environmental propaganda.

The isomorphism doesn't end here. Schwab argued that the mankind would go extinct in 100 years, around the year 2055. Now, you must feel a certain deja vu when you see this number, right? That's right. 2055 is the year when the last man on Earth looks at his video collection in Age of Stupid, written by Fräulein Franny Armstrong.

Suddenly, many things start to make much more sense. Armstrong is the only founder of 10:10, the foundation that has made ideologically inconvenient schoolkids detonate in front of their classmates. Many of us have asked "How is it possible that those people have revealed their Nazi reasoning so openly?"

Now we know the answer. Franny Armstrong et al. are obsessed with the Nazi ideology, and the plagiarism of Schwab that Armstrong showed in "her" film Age of Stupid is just another piece of evidence supporting this claim.

Let me add one more quote, showing that there is a genuine consensus about climate change among the Nazi Bosses:


The Boss waved him angrily aside. "There is no doubt what­ever that the water situation is due, first and foremost, to the interference of man. As to climatic changes, you heard what the head of my department for air poisoning said: the gases from industry raise the quantity of carbon dioxide in the atmosphere. This causes the climate to become warmer and this contributes to the disappearance of water. It all hangs together; the diabolical circle is closed."

"The change of climate," he cried, "has at worst only helped to increase the general water shortage, and I make it my business to spread the view that this increasing shortage has absolutely noth­ing to do with de-forestation, the regulation of rivers or anything of that kind.


This 1958 insight about the disappearance of water was recently parroted - without any improvement or elaboration - by CzechGlobe, an EU "center of excellence" for the corrupt climate cranks, too.
Luboš Motl v 4:39 PM
Share