Czech readers may want to know that "shale gas" is "plyn z břidlic", something we don't usually talk about. ;-)

Benny Peiser has distributed links to a couple of articles showing that the EU is getting serious about shale gas - which has been increasingly important in the U.S. from 2000 or so.


I added the last link because it's very fresh. For CO2-obsessed people, natural gas produces about 20% less CO2 per kWh than oil and about 40% less than coal. Clearly, not so much difference for a CO2 fundamentalist. ;-)

Poland may soon become another "shale" Norway. One week ago, the Czech media would inform us that foreign companies came to look for shale gas in our homeland, too.

In particular, BasGas (Australia) and Cuadrilla Resources (United Kingdom) are going to check the territory around Valašské Meziříčí (Northeast of the country, near Poland) as well as the region near Barrandeum - between Beroun and Prague, one that is seen from the train if you travel from Pilsen to Prague - named after paleontologist Joachim Barrande who studied the rocks over there. 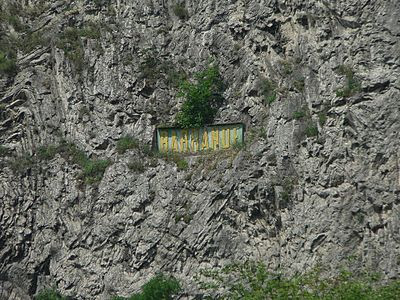 Nearby neighborhood of Prague, Barrandov, is also named after him and is the main Czech counterpart of Hollywood or at least Bollywood. In fact, this plate on the Barrandov Hill could even be viewed as the counterpart of the letters "Hollywood" in Hollywood even though it's a little bit smaller. :-)

I find the rocks in the Barrandeum fascinating and I wouldn't be too happy if they were destroyed by miners. On the other hand, they're fascinating because they look like the Moon landscape, and maybe the character wouldn't change much if the hills became a new powerful source of shale gas. ;-)
Luboš Motl v 3:22 PM
Share