Czech (nominally) right-wing prime minister, Mr Petr Nečas, has vetoed the candidacy of Mr Ladislav Bátora, a deeply conservative intellectual, who was expected to become a deputy education minister of the Czech Republic because Mr Bátora used to be a candidate of the nationalist National Party in some past elections. See Czech Press Agency. 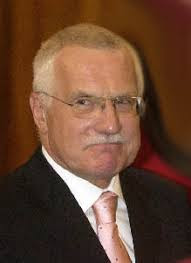 President Klaus has identified this dismissal as another example of the dictatorship of political correctness in his today's op-ed in Právo (in Czech).

For you to understand the title: "the Hilsneriad" was a media campaign started in 1899 when Mr Leopold Hilsner, a poor Jew, was first accused of murder of a 19-year-old Czech woman, Ms Anežka Hrůzová. It was the most intense collection of anti-Semitic events that controlled the Czech society at the end of the 19th century. Prof Tomáš Garrigue Masaryk defended Hilsner and was humiliated - which hasn't prevented him from becoming the founding president of Czechoslovakia years later. I will explain other things that are unfamiliar to non-Czech readers inside square brackets within my translation of Klaus's text which starts right here:

During the last week, several Czech journalists together with some politicians - which, shockingly for some of us, included some politicians from the right side of the political spectrum - have created the so-called BátoraGate which I find deeply troubling. I was still believing that I live in a primarily democratic society but there are growing signals that it is not the case. While our contemporary society continues to boast many attributes which allow it to be called democratic - unlike e.g. Colonel Gaddafi's regime - something completely different is gradually becoming the dominant force. Not such a long time ago, I discovered the English term "PC-Society" in an American journal. The term didn't denote a society full of personal computers. Instead, it was the name of a politically correct society. This is an amazing and enormously useful term.


Moreover, what is and what is not politically correct is being defined by one - totally self-appointed - group of people that has conquered a completely unbelievable position in the media and that tells us in a sovereign and authoritarian way what we are allowed to do and what we are not allowed to do. It is a global phenomenon, a European phenomenon, as well as a Czech phenomenon. He who dares resist it faces an avalanche of attacks leading to his discrediting in society, often a loss of job, and his personal ostracism. This exactly is happening to Mr Ladislav Bátora in our country.

In order for me to prevent speculations, I have to say that I don't know Mr Bátora in person, I have never talked to him directly (not even via phone, and I haven't exchanged mail with him), and I haven't even read any text he authored. I know that at www.euportal.cz, one may find a photograph from a rally against the Treaty of Lisbon which was organized by the D.O.S.T. movement and where I stand next to him; but I have never exactly known who he was. The only thing I know is that he is a deeply conservative, authentic right-oriented man who attends various public events to express his opposition to trends he disagrees with. Those include the European Union because he thinks - much like I do - that the European Union, especially in its current incarnation, is a flawed construct and that this opinion has to be loudly articulated. I would even dare to say that this opinion is close to the majority attitude of the Czech society (and maybe even the people on the whole European continent): this, however, runs counter to the opinion of the strategists of political correctness (and even they may disagree with the ideology they promote - which may only reflect their interests) and those who want to be on good terms with Brussels at any cost.

On Thursday, February 24th, 2011, I accidentally read short excerpts from Mr Ladislav Bátora's CV which have intrigued me immensely. I was searching for the whole text and I found out that the autobiography was written on March 8th, 2009, and published on February 21st, 2011 on the www.euportal.cz server. For you to get some idea about Mr Bátora's opinions, here is the excerpt:

Conservatism isn't an ideology but an attitude to life - as every proper conservative may confirm. Here are a few examples describing myself:

Better Confucius than Rousseau, better Franz Josef I of Austria [conservative emperor in the 19th and 20th century] than Joseph II [a progressive emperor], better Ms Jarmila Šuláková [an old lady singing folk songs] than Mr Jura Pavlica [a violinist and singer singing slightly modernized folk songs], better local than global, better mellow szegedin goulash from the "Pub of Rozvařils" [a traditional name of a rural restaurant] than yummy emulgator food from McDonald's, better Ms Božena Viková-Kunětická [a Czech writer and politician before the war] than Ms Jiřina Šiklová [an ex-communist ex-dissident sociologist who became green], better education of the basics of Greek and Latin than courses how to pull on condoms, better "with Lorenová" [with the correct Czech feminization and declination of names] than "with Loren" or "with Lorena" [adopting names and words directly from other languages], better a South Bohemian country woman than a female intellectual from Prague, better a modest Czech crown than a prettified euro, better Agnetha Fältskog than Joan Baez, better tradition than progress, better matternity leave than mandatory day euronurseries, better Mr Stanislav Sucharda [sculptor 100 years ago] than Olbram Zoubek [a contemporary, but old, sculptor], better Nixon than Bush, better Bartered Bride [by Mr Bedřich Smetana] than Leaving [by Václav Havel], better čecháček [a derogatory Czech term for (provincial?) Czechs] than světáček [a similar, less usual word to denote a cosmopolitan], better to be a creditor than to owe, better Koniáš [a jesuit priest 300 years ago who also liked to burn protestant books and became a symbol of it] than Halík [a top contemporary Catholic priest and left-wing intellectual], better wayside inn "U tří lip" [By Three Lime Trees] than Grand Hotel Bilderberg... And certainly not europeism, humanrightism, genderism, multiculturalism, feminism, antidiscriminationism, political correctness, oikophobia [fear of the home], ecumenism, positive discrimination, homosexualism, Truth and Love as ordained from Havel's unventilated moral and spiritual den, environmentalism, International Court of Justice, Mr Kaplický [a late Czech architect who proposed the "melted blob" for the National Library in Prague] and Mr Ježek's blobism [defense of this blob by Mr Vlastimil Ježek, the director of the library]...

And, more generally, all this brainwashing neosocialist dogmatics of the seigniorially distributed Well-Being instead of Freedom; dogmatics that is intentionally and maliciously beating us and it will certainly kill us at some moment! Let's try to delay this end as much as possible.


[VK:] I insist that it is legitimate to share opinions of this type and that it would be fair to conduct a serious dialogue about them, not to condemn them a priori. As far as I am concerned, Mr Bátora's opinions are close to mine in many points. I also prefer tradition over putative progress, I also prefer to listen to Jarmila Šuláková on radio rather than to the destroyer of the folk music Mr Pavlica. Even I see a threat in the seeds planted to the human society by J. J. Rousseau, even I am afraid that the slogan of the civic society is hiding lots of non-democratic ideas (and deeds). The difference between Mr Koniáš and Mr Halík is 300 years (and probably a genuine faith in the former case and just some media equilibristics in the latter). I have never used the term "čecháček" (a provincial Czech) in a derogatory sense (this term is one of the icons of the Czech version of the PC-Society) but I am afraid of our allegedly "global" giants, and so on, and so on.

That's why we should thank Mr Ladislav Bátora for having articulated those words so sharply and courageously.

P.S. The Catholic priest, Mr Tomáš "Koniáš" Halík, has praised Klaus because he's not only an expert in cinematography and climatology but also in theology. Theologian Halík himself admitted that he couldn't react to the analysis - because, as we know, he's not quite competent. However, he returned something he's good at - silly expletives. According to Mr Halík, President Klaus is converging towards the attitudes of "fascizing petit bourgeois". :-) The last two words were stated in Czech and simply represents inhabitants of medium-sized towns.
Luboš Motl v 5:52 PM
Share