This video, created by an 18-year-old man, actually celebrates the communist coup. It's amazing what the youth is still ready to advocate.

On February 25th, 1948, the Czechoslovak communist boss Klement Gottwald came to the Wenceslas Square where he, barely able to speak due to his limited intelligence, told his brainwashed supporters:


The second and temporarily the last democratic president of Czechoslovakia, Prof PhDr et JUDr Edvard Beneš, had the same bad luck with the Nazis. In both cases, 1938-39 and 1948, the democratic forces were just overwhelmed by the emerging totalitarian powers. Pro-democratic ministers tried to protest against the growing arrogance of the communists by resigning in a protest act; however, this has only helped to speed up the communist's convergence towards complete power over the country.


The mostly uneducated masses of people happily screamed and began to ruin my homeland by a totalitarian regime that ultimately lasted for more than 40 years.

Note how those people are suitably dressed in the video above. That was still the time when Czechoslovakia would belong among the 10-15 most civilized countries in the world, a fact that wasn't changed even by the cruel Nazi rule during the war. Things were very different in 1989 when the communists were finally chased away.

In the United States, the public was totally shocked by the "Prague crisis" even though some well-informed people had known that Central and Eastern Europe would soon become a Soviet satellite. The opposition to the Marshall Plan de facto instantly evaporated. The insufficiency of the atomic weapons was emphasized. Truman made a speech and things were ready for a massive growth of the military budget. 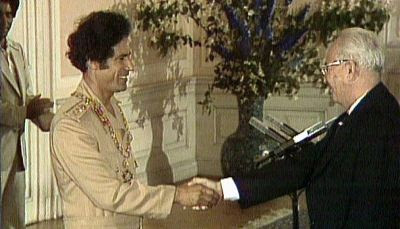 In June 1978, Muammar Gaddafi is receiving the Order of White Lion with a Chain, the highest order in Czechoslovakia and the Czech Republic, from the last communist president Gustáv Husák. Libya and Czechoslovakia were extremely close friends. Just in the 1970s, Libya got Czechoslovak weapons for 4 billion crowns - $200 million or so. See a video about the 1978 visit.

Well, I exaggerate how good friends they were. It's not hard to look at the independent fashionable Maverick inside Gaddafi and the boring communist pig faces of our comrades to see that they were not "real" friends. Moreover, Gaddafi shocked our comrades in various ways - for example, he wanted to build a mosque in Czechoslovakia.

However, the trade with our weapons was important for both sides - even though our side also preferred much more silence about the deal. And "we" had common enemies while Gaddafi has also brought some camels to the Prague zoological garden haha so everyone was satisfied. ;-)
Luboš Motl v 8:07 AM
Share