Another blow for nuclear energy

Remotely related: Holy cow, the president of an official EU's EESC body has declared that the earthquake was a sign from Mother Nature that we need to combat global warming. I want these crooks to be outlawed!

The Japanese earthquake has led to serious problems with the cooling systems of two nuclear power plants.

Radiation in one of the plants increased by a factor of one thousand; see the video with some smoke. The average time in which one gets cancer from the background radiation may be 200 years. If you increase the radiation 1,000 times, the average time to get the disease goes to two months or so. You don't want to work in the vicinity of the reactor. 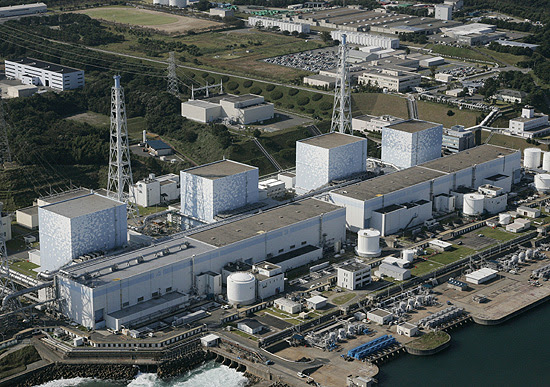 Fukušima I: meltdown has technically begun in the facility (which isn't quite the same thing as a doomsday yet); an explosion followed, destroyed one of the four reactor buildings on the picture (the far right one), and injured some people. This power reactor is stronger than Chernobyl but vastly less harmful in similar situations.

Mildly radioactive vapor had to be released to the atmosphere to reduce the pressure. Some people have heard an explosion fifteen minutes ago. The representatives have denied it has shattered the reactor. Your humble correspondent generally believes the nuclear energy guys but I just feel uncertain at this point.

One always has to be skeptical because too much is at stake.


I am a fan of nuclear energy but I am very far from being a fundamentalist. Good old fossil fuels remain superior from many viewpoints. Now I am going to say something that will likely shock my fellow supporters of nuclear energy in Japan but I will say it anyway:

It's a bad idea to build nuclear power plants in Japan.

Right now, Japan is the third largest peaceful nuclear power, getting 35% of its electricity needs from its 53 nuclear reactors. Let me show you two basic maps that suggest that the islands of Japan are just a bad place for nuclear reactors:

That was the first one. And here is the second one:

You know very well what are the two trivial points I want to make. The average population density in Japan is 340 people per square kilometer - about ten times higher than in the U.S. And the Japanese islands lie directly on the boundaries of Filipino plate, Eurasian plate, North American plate, and the Pacific plate is not far.

The earthquakes comparable to what we just saw are not an insanely unlikely anomaly. They're bound to occur at some point.

The cost-benefit analysis for the nuclear plants should include the price of the safety measures, relocation of the people in the case of a problem, and so on - multiplied by the appropriate probabilities of the problems. It should also be acknowledged that there is a nonzero probability that the population may change its mind and all the nuclear plants may be stopped well before the investments are repaid. I am afraid that the nuclear power plants would become unprofitable in Japan if all those terms are included.

Kraftwerk's "Radioactivity" was among my high school physics teacher's most favorite songs. A good example of the electronic music of the 1980s - but I have never realized that it was essentially an anti-nuclear manifesto. Or do I misunderstand it?

Japan should try to buy a piece of Siberia or anything else (and I also want to say that our Russian friends should sell it, druzjá, požálujsta!) and use for industrial facilities such as nuclear power plants.

Quite generally, this is the kind of international collaboration that would make sense. Solar energy remains uncompetitive but it's still true that if it becomes competitive in the near future, it's more likely to occur in Africa where the Sun is shining nicely. So I actually do think that solar panels should be built somewhere near Sahara.

Whether newer solar cells will be more efficient than the current ones - and whether they may ever produce cheaper energy than the burning of coal - is highly uncertain. However, the result of the comparison of the Sun in Sahara and the Sun in the Czech Republic is pretty certain. We won't beat those Africans in the amount of sunlight any time soon!

If someone decides that he can only build nuclear plants or only solar panels, he may uncritically defend the technology he works for the living. However, there should always be at least some freedom to switch to a closely related project if it uses similar technologies but if it is clearly economically superior.
Luboš Motl v 9:36 AM
Share