The British Met Office has been criticized for its incorrect predictions of the weather (almost always warmer than the reality) and for its detachment from the empirical data.

Some enlightened minds in the Met Office agreed that it was a great idea to observe the weather and the climate. Why didn't they think about it before? 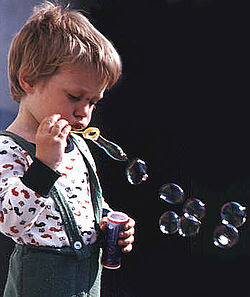 A scientist with a bubbly fuck (the bublifuk is the official Czech name of the device and it is a 100% polite word - after all, "fuk" is one way to say "blow") working for the Met Office.

So they decided to use as reliable methods to verify their predictions as the methods employed to produce them - namely as their climate models. As AFP reports,

The U.K. citizens are asked to observe the motion of clouds in the mirror while they're putting the makeup on them; report how warm or hot they feel in the bedroom; and call the Met Office telling the climatologists in what direction they managed to create a soap bubble with their bubble blowers. The concerned citizens must also call their climatologists when they see an aircraft with contrails or one without contrails.

You must agree that it's an ingenious technological idea that proves that those $30 billion paid to the climate science in the recent years were not wasted. The capitalists in the commercial sector could only construct things like iPad 2 but they could never think of a sophisticated monitoring system based on volunteers who blow bubbles and watch contrails and clouds in their mirror while putting makeup on their faces. Government-funded science is clearly necessary for the highest-quality technological advances.


This multi-dimensional cutting-edge observational technology will allow the Met Office to increase the accuracy of their knowledge about the atmosphere and predictions of its future behavior by orders of magnitude:


"They're all aspects that are actually quite difficult for us to analyse or measure with our standard monitoring network and so it's all about capturing new data that can complement our existing observation and tell us a little more," Met Office climate scientist Mark McCarthy told AFP.

In particular, once bubble blowers start to report that their bubbles are moving to the North, West, South, East, or some directions in between, instead of the other directions, or if they're not moving at all, it will prove that the climate apocalypse is imminent (which becomes self-evident if a bubble dares to burst).

By employing lots of bubble blowers, they may fight the whistle blowers and restore the image of the Met Office as a leading climate institution in the world. Meanwhile, the TRF readers with 6-year-old-children will probably think that the employees of the Met Office are somewhat retarded children.

Just to be sure, this AFP report is not a joke invented by a skeptic to discredit them: see also The Guardian. This is a genuine description of the Met Office's idea what a settled scientific discipline in the 21st century looks like. And it's not hard to see that the Met Office is still a few centuries ahead of its daughter companies and ahead of the likes of Rajendra Pachauri who control them.

The climate becomes a little bit more complicated for the Škoda cars bubble blower, Mr Matěj Kodeš. The show gets more interesting at the end. His Spanish colleague using a chewing gum has predicted a monstrous hurricane inside an even bigger hurricane. ;-)

But that's nothing against Mr Louis Pearl's collection of hurricanes on top of each other, being orbitted by several rings of tropical storms, with an interior with an elevated concentration of aerosols and another one with extra greenhouse gases: