Did the Supermoon cause the Japanese earthquake?

Yesterday, during a fun trip to Northern Bohemia, I was also exposed to the kind of science that is hot among those who are not exactly physicists. What's shaking? Here it is: 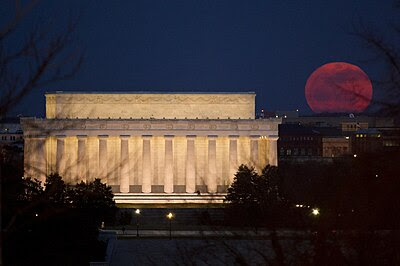 Last Saturday, i.e. three days ago, we experienced the best Supermoon in 18 years. I hadn't heard about this particular "breaking news" from the world of science but I should have. Google News offers about 3,000 stories about the Supermoon event. It's almost 1/3 of the number of stories that mention "global warming" - a pretty big deal.


And for example, the 3,000 articles make the Supermoon at least 15 times more visible in the media than the Large Hadron Collider that had to collect the visibility for a whole month (because the Google News data cover the recent 30 days). My sources are just directly reflecting these societal preferences that I find utterly frustrating.

What follows is some simple maths describing the Supermoon. Needless to say, this is not the message that readers of the newspapers learn - even this is too complicated: what they learn is the - totally wrong - message that events such as the Supermoon are significant. It's not hard to see that this opinion is nothing else than a piece of astrology. And indeed, you will find out that the concept of a Supermoon was coined as recently as in 1979 - by astrologer Richard Nolle.

What is the Supermoon?

Well, it's not hard to guess. If you see the full moon which we had on Satuday and if you hear - or guess from the visual perception - that the Moon looks large, you may figure out what the term means (and I did): it's a moment when a full moon is very close to the perigee. How often does it happen?

Well, obviously, it never occurs "completely exactly". But we must know how the Moon orbits around the Earth. If we neglect some slow motion of the Solar System and some secondary perturbations, the Moon orbits the Earth along an ellipse.

Its distance is changing between 364,000 and 407,000 kilometers. One sidereal day takes 27.32 days. After this period of time, a perigee (closest approach) is followed by another perigee (closest approach). The orientation of the ellipse is fixed relatively to the stars. So you may just (linearly, translationally)) subtract the motion of the Earth-Moon bound state around the Sun if you want to study what's happening with the elliptical lunar orbit.

However, those 27.32 days are not the period of the lunar phases. How do we calculate e.g. the time between two full moons? Well, it's not hard. Look at the Moon-Earth system from the side where the motion of the Moon is clockwise. Every day (86,400 seconds), the Moon completes 1/27.32 of its sidereal period (the perigee-perigee separation, with directions fixed relatively to the stars). However, the Earth completes about 1/365.25 of its annual journey around the Sun.

The Earth is also moving in the clockwise direction in my convention - most bodies in the Solar system carry the same sign of the angular momentum. So if those 27.32 days above were 365.25 days, the Moon-Earth-Sun wouldn't be changing at all: the two motions would cancel. However, 27.32 differs from 365.25, so if we want to figure out how the motion around the Sun influences the lunar phases, we just subtract their inverse numbers:


So during one day, the Moon completes 1/29.53 of its job needed to get from one full moon to another full moon. It follows that the full moons follow each other after 29.53 days. We call this period the synodic month (synodic means "relatively to the line defined by two other objects", in this case the Earth and the Sun).

The number I calculated - 394.6 days - is remarkably close to 13/12 of a year (the error is just 1.3 days or so). So it takes about 13 calendar months to return from one Supermoon to another. You may check some dates to see that this calculation works.

Of course, if you want to be very accurate, the perigee and the full moon occur at discrete moments so it is impossible for them to ever be completely coincident. However, if you allow a plus minus 1.1 day tolerance (half of the 2.21-day deficit mentioned above), the Supermoon occurs every 13 calendar months or so. 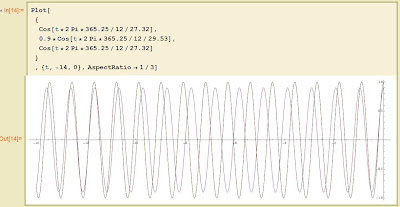 Sidereal and synodic months for 14 calendar months before the latest Supermoon on Saturday (the right side of the graph). Click to zoom in. The graph apparently differs from the numbers in the text because of lunar precession, caused by the solar tide, which rotates the orientation of the lunar orbit every 8.85 years.

Do the Supermoons which occur "more accurately" allow you to see a "substantially" bigger Moon than the Supermoons that are misaligned by the maximum error of 1.1 days which can be guaranteed every 13 months? Well, the answer is a resounding No.

The distance of the Moon may be approximately written as


Note that the distance oscillates like a cosine - a good enough approximation for a relatively small eccentricity. The numbers are chosen so that the cycle is 27.32 days, the maximum is 406,000 km, and the minimum is 364,000 km. The phase is chosen so that perigee occurs at t=0.

It means that e.g. (statistically) every other Supermoon candidate - e.g. once per 26 calendar months (just slightly above 2 years) - will be within 0.04% of the "ultimate Supermoon" event when it comes to the visual size of the Moon. This small difference will make it harder to find out that it's not quite the "best Supermoon" even to very sophisticated amateur astronomers. You should compare this tiny percentage with the 12% variations (407/364=1.12) of the apparent size of the Moon that are alternating every month.

Impact of the Supermoon

Now, rationally, if there is some effect of the moon phases, they primarily have individual effects. The synodic phases - such as the full moon - only change the amount of light reaching the Earth by an extremely tiny amount. The visual impact on skygazers is much larger.

The sidereal monthly cycles may have a bigger impact. After all, we get really low tides when the Moon is in the perigee (closest approach to the Earth). However, can something happen when the two points coincide? Well, I don't think so. It's just astrology. No measurable physical effect on the Earth is likely to care about the alignment of the two cycles.

Note that the Japanese earthquake occurred 8 days before the Supermoon. That's more than 1/4 of the Moon's cycle - whether you mean the synodic or the sidereal one. So during the Earthquake, the distance of the Moon was actually rather close to the average value, very far from the Supermoon-like minimum.

I think that most TRF readers must be infidels when it comes to astrology so I am not going to preach to the converted.


P.S.: You may be confused by some numbers above - is the cycle of the Supermoon 12 months or 13 months etc.? Well, I was oversimplifying the cycles a little bit. 27.32 days is the sidereal day and, approximately the same, tropical day: the Earth-Moon direction returns to the same vector relatively to the reference frame of stars.

But because of lunar precession, which takes 8.85 years or 3233 days, the time between two perigees is somewhat longer:


So the time between two perigees is actually 27.55 days: it's called the "anomalistic month". There's also the draconic (nodical) month, 27.21 days, between two ascending nodes (the Moon crosses the ecliptic - the plane of the Earth/Sun orbit, whether you like the heliocentric or geocentric description - while going up to the Northern Hemisphere; the descending node has the opposite meaning) but the draconic month is only important to calculate the eclipses, not the Supermoon.

To calculate the actual periodicity in which the moon phases (synodic month) get synchronized with the distance phases (anomalistic month), we need to know