James Delingpole has pointed out the following interview,

Jill Duggan appears around 48% of the audio above.

She may be our continent's most important person who is deciding about the creation of a climate tax that may suck trillions of euros from the Europeans' pockets.

But she doesn't have the slightest clue about carbon dioxide, the climate, the effect of CO2 on the climate, or the number of jobs that may be lost as a result of the new tax.


Still, she has the chutzpah to show up on the radio of another continent as a climate representative of ours. In fact, she wants to teach the Australians how to introduce their carbon tax, too.

After lots of attempts to get any factual information out of her, and despite her heavy efforts to make up some numbers, she is only able to admit that Europe only produces 14% of the world's CO2 emissions. However, in the very next sentence, she announces that 14% is equal to "one quarter".

She doesn't even know the EUR/AUD exchange rate within a 10% accuracy, despite her ongoing visit to Australia. And her only idea about the costs of the carbon policies is that it's cheaper now than later. (True enough, if 1/2 of a greater GDP in the future were liquidated by the overreproduction of idiots in the European Commissions, more money would disappear than if you liquidate 1/2 of the current, smaller economy.)

In spite of a long time when she had the opportunity to explain why it could be a good idea to introduce such a tax, the only thing she is able to say is that it must be a good thing because the EU governments are planning that! That's quite a reason.

Well, they're doing that because lots of EU political institutions have been contaminated by tons of breathtakingly dumb poultry similar to her which is being sent all over the world which is why their politicians think that this poultry has anything sensible to say. A vicious circle, indeed. 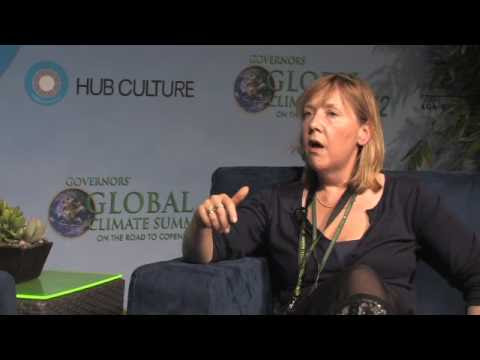 For example, they ask her what is the expected reduction of the global mean temperature that would be caused by Europe's unilateral decision to reduce the CO2 emissions by 50% by 2100. She has no clue about the order of magnitude of the number - it's the single most important number relevant for the project she is supervising but she doesn't even seem to care.

In reality, the observed (satellite) warming trend is about one half of those 0.25 °C per decade mentioned above, so the actual realistic cooling produced by Europe's centennial self-sacrifice is about 0.05 °C, just like they correctly told her. Imagine, the Old Continent that gave rise to the modern civilization will suffer in 50%-like reduction of living standards for 100 years and the result is one twentieth of a degree of cooling (which is an infinitesimal bad thing, anyway). Does she have an idea about this number? Maybe, she knows it but she's just professionally hiding it, right?

Well, I think the official "European Commission carbon emissions trading and pricing expert" Jill Duggan doesn't know any of it and she won't know it even after they told her. She wouldn't know it even if someone has forcefully showed her my elementary calculation. She doesn't want to know it. Her parasitic existence depends on not knowing any of these fundamental numbers so she won't know.

Now, job creation. Because her entirely ignorant position has been totally humiliated, she decided to advocate the climate tax by another strategy. It must be good because other people are paying her to fly to Australia to promote the plan even outside the EU. Why is it good? She doesn't say but in a very vague way, we heard that it must produce jobs.

The hosts offer her some particular economists' papers that show that 2-5 jobs are liquidated for every green job that is created as a result of these policies. She has clearly never heard of any economic analysis of any of those policies and no one in the EU politics seems to care that similar incompetent people are effectively making medium-term decisions about hundreds of billions of euros - and, if they succeed, trillions of euros.

There's lot of bad and silly things going on in our national politics and local politics at many levels. But if something really stupid - at a big scale - is going on, the informed constituents may eventually get heard and remove the representatives who became really counterproductive.

But Ms Jill Duggan wasn't elected; she doesn't need to be elected and she is being protected and isolated from the real world by miles of protected levees. Those levees are semi-transparent - money can flow to her but not away from her and she is de facto protected from any criticism despite her fact that her skull is filled with nothing else than feces.

And even though she has discredited the confederation into which my country belongs in front of lots of listeners on another continent, she has declared that she was astouned by the nature of the debate over carbon pricing in Australia. Wow. She was astounded that at least some of the people actually care what the costs and effects are and whether the plans make any sense.

In this article, she also complains that Australians don't want to be the first scapegoats - even though EU countries have played with the CO2-regulating nonsense since 2005 (true!) - and she says that there were no "job losses as a direct result".

Well, it's because the law doesn't explicitly say that "jobs X,Y,Z have to be liquidated". That's why all job losses are inevitably "indirect" consequences of the policies but that doesn't mean that they're unreal. They are quite real job losses and in the U.K., Spain, Germany, and Italy (and others), there have been 2-5 job losses per 1 gained green job.

In three similar articles, she finds it astonishing and bizarre and astounding that Australia debates the need for a carbon tax at all. In her EU homeland, a debate (!?) about a bill that would suck trillions of euros would apparently be unthinkable. :-) Such a debate could even question the authority of great leaders such as herself who managed to learn, in her all life, a whopping number of three expletives!
Luboš Motl v 9:13 AM
Share