Steve McIntyre managed to uncover a piece of scientific forgery that looks even more serious than the original "hide the decline" trick:


The summary of the story is very simple. The Briffa-Osborn 1999 reconstruction of the climate depended on a variable called "yrmxd" in a computer code. You can set it to any year and the program will cover up the whole history of your proxies before the year "yrmxd". The variable was set to 1550 instead of the correct 1402 and the result looked like this: 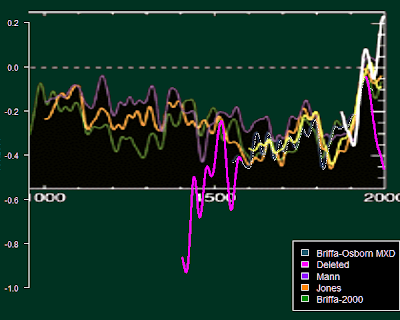 Look at the brightly shining pink lines - because both of these segments have been erased in the final paper. Those guys have censored the "distracting" decline of the temperature obtained from the trees after 1960 (they have masked the so-called "divergence problem"): this is the original "hide the decline" scandal.


But as you can see, they have also hidden a 3 times longer period, 1402-1550, which was arguably even more inconvenient because the trees indicate a faster warming in the 15th century than in the 20th century. By this cosmetic surgery, they have eliminated pretty much 1/2 of their data - on both sides - because they didn't support the predetermined conclusion and only picked the 1/2 that could be used as a part of the hockey stick.

I suspect that the whole alarmist paleoclimatological community has been well aware of this 15th century problem - data clearly disagreeing with any form of a hockey stick. My reason for this broader statement is that the censorship seems to influence the same period as the aptly named "censored" directory by Mann that was ultimately erased from MBH98.

MBH98 came before Briffa-Osborn 1999 so you may try to guess which mann is the most likely primordial originator of this fabrication.

It seems pretty likely that this or a very similar fraud affects pretty much every single climate reconstruction in the literature going back at least to 1400 by anyone who has failed to explicitly denounce Michael Mann as a pile of f*ces. Those people - if they deserve to be called in this way at all - have been lying and deceiving everyone for decades and they should be sent to Guantanamo Bay. ;-)

Well, Tim Ball has offered a better verdict: the mann should be moved from Penn State to the State Pen. A hilarious quote! Needless to say, the mann has sued Tim Ball. If Ball loses, I will try to find addresses of oil companies and urge them to pay Ball 10 times the money he will lose.

Now, let me add that I am far from certain that the Earth has seen a warming trend - or even a huge warming trend - in the 15th century. In fact, other climate reconstructions, including one from Craig Loehle who is no alarmist, indicate that the 15th century already saw a cooling before the little ice age. However, what I am certain about is that there have been sizable temperature variabilities in the pre-industrial era and the alarmist movement has been working hard to deprecate them.