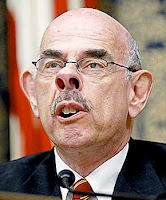 As Politico.COM reported, Mr Henry Waxman, a prominent crusader against carbon dioxide in the Democratic Party, wanted the U.S. Congress to codify a new dogma:


Warming of the climate system is unequivocal.

Fortunately, he hasn't noticed that brainwashed simpletons of his kind have been turned into a minority in the American Parliament.

About 20 people supported the idea to make a law out of those dumb oversimplified and mostly wrong pro-AGW quasi-religious proclamations; about 30 people opposed it. It just happens that the House Energy and Commerce Committee that had to vote about it contains 20 Democrats and 30 Republicans.


Mr Waxman has authored about 3 more laws whose fates were identical. The laws said that "the scientific evidence is compelling", "man-made emissions are the root cause of recently observed climate change", and "we shall eternally worship Al Gore, our holy savior".

This is some visible progress. We remember times when even the G.O.P. was gradually jumping on the AGW bandwagon. Well, it's time for the Democratic Party, a key party in the world's only superpower, to leave the crumbling bandwagon as well.

So far, it's sad that the AGW bandwagon has been sinking for the wrong reasons - but that's how those things often occur in the real world. Another unscientific driver that is likely to weaken the global warming movement is the suppression of the nuclear power that is likely to result from the hassle in Fukushima: WUWT.

It's very likely that CO2 emissions in countries that will give up a few old or future nuclear power plants - because of an overreaction to the Japanese nuclear threats - will grow by several percent, frustrating CO2 haters across the globe and making their dreams about CO2 reductions ever more detached from reality.