Is there a 66-year cycle in temperatures? 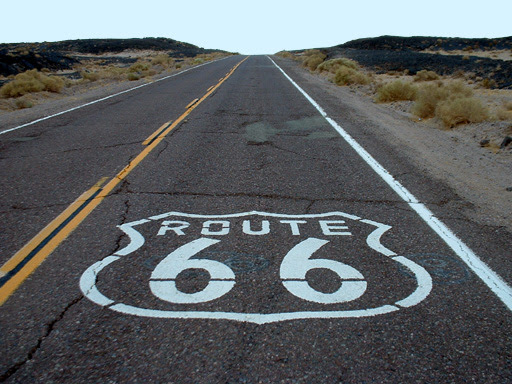 If this evolution may be extrapolated in the obvious way, there is a 66-year cycle in the temperatures. The 20th century warming is biased because the century included two warming half-periods but only one cooling half-period: that's why the warming trend in the 20th century could be much higher than the long-term one.

Some of the warmest years - at least in the U.S. - appeared approximately 66 years before the warm years such as 1998.

Grant Tamino Foster studied this question in a very interesting article on his blog,


and the obvious conclusion of his graphs is that the 66-year cycle seems to be much more than a coincidence of chaotic 20th century graphs.


In particular, the data from the Agassiz ice cap between the years 6000 and 4000 B.C. were Fourier-transformed and this is the power one may obtain: 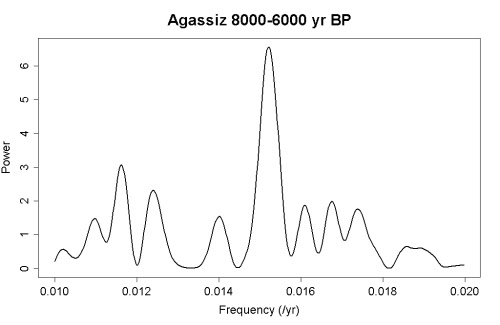 There is a pretty sharp peak near the frequency "0.0152 cycle per year" which corresponds to the periodicity "66 years" or so. Tamino says that there is only a 7% probability that such a strong peak appears in a similar graph by chance - but he claims to be unimpressed.

Well, especially if I combine it with the apparent cycle in the 20th century, I am somewhat impressed. You know, in the IPCC terminology, it is "very likely" (more than 90%, in this case 93%) that judging by the past data, the cycle will manifest itself in the future. We're not really far from the 95% threshold of the "extremely likely" and 93% is a higher number than what one obtains for many key propositions of the IPCC. It would be a good idea to check for such peaks in the broadest possible collection of ice core and similar data one can find. Of course, if the effect is real, the confidence level could be (and, actually, should be) substantially increased.

If the (approximate or strict) 66-year cycle is real, we may be entering - or we may have entered - a similar warming-free period as the period from the 1940s to the 1970s. Ocean cycles linked to the Atlantic Ocean - and perhaps the Pacific Ocean - would be the most likely explanations if the 66-year cycle were real. Knudsen et al. 2011, a paper discussed by Tamino, seems to be much less conclusive when it comes the value of the maximally likely periodicity.

Of course, one must be careful about such hypotheses. I agree with Tamino that many people fallaciously talk about "cycles" and suggest that they're inevitably periodic even though what they actually mean - or what they can support by the evidence - are just some fluctuations that appear at a similar characteristic time scale. These fluctuations may be caused by many things but the extent to which they like to be periodic has to be studied without prejudices.

Of course, the more strictly periodic some fluctuations caused by a particular source are, the more predictive their effect on the climate becomes. On the other hand, when it comes to the appraisal of the relative importance of the natural effects and e.g. the enhanced greenhouse effect, it doesn't really matter whether the natural contributions are periodic or not. Aperiodic terms could be hard to predict; but they could be able to beat the effects of CO2 (and other things) equally well.