A library in Prague: 40 gigapixels

In May 2009, I declared a contest based on a 1.5 gigapixel photograph of the Obama inauguration. In December 2009, TRF mentioned the world's largest spherical panoramic photograph: its 18 gigapixels were collected on the Prague TV tower. 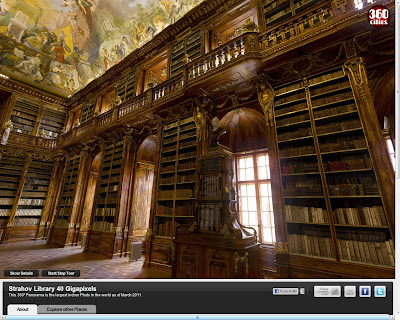 The progress hasn't stopped. The world's largest indoor photograph has 40 gigapixels and you may guess the the city where it was taken: well, it's Prague once again. As the WSJ blogs and others figured out, it's a photograph of the Library of the Strahov Monastery (early 18th century) by Jeffrey Martin.


You may try the "tour". Let me try to avoid the misunderstanding once again: your digital camera probably has megapixels only and we're talking about gigapixels here which is not quite the same thing. ;-)
Luboš Motl v 8:36 PM
Share