Models are wrong: ice sheets grow from the bottom, too

Some people have rather insanely claimed that the climate models are OK - they are qualitatively settled. We can trust their predictions for the future centuries because the models' treatment of the phenomena is unlikely to change much in the following decades.

But the reality is that their half-life may be counted in months. Every few months, some lethal bug is being discovered in the prevailing description of various processes that are important for the climate. 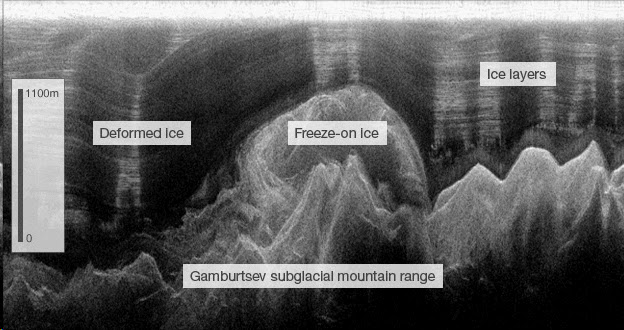 Five days ago, the media have reported that

Lead scientist Robin Bell of Columbia University said that the models of ice sheet - which are relevant for the behavior of Greenland and Antarctica, which subsequently influence the sea level, ice-albedo feedbacks, and other things - were as wrong as models of cars without tires. What happened?


Well, even a week ago, everyone would think that the ice sheets are completely made out of ancient frozen snow. The ice sheets must grow at the top, and disappear at the top.

However, radar pictures similar to the picture above have revealed that there are also subglacial mountains and they help the deep water to melt and/or refreeze. Consequently, ice sheets also grow or disappear from the bottom up. The East Antarctic ice sheet seems to grow in this way all the time, as the title in Science says.

Now, should we be shocked? If one is not creative enough, he could probably assert that the ice can only change at the top. But imagine that someone asks you the question in such a way that you are told about the other possibility.

"Can ice sheets grow from the bottom up?"

What would you say? Well, I think that some of us would think about subglacial lakes. If there are subglacial lakes, and Vostok is the most famous one, they can grow or get smaller. Many other things may happen. After all, mountain ranges may be created in similar way as ordinary mountains. Why not? Maybe, we would answer.

What I want to say is that the truth is rather natural. There is really no reason why the ice sheets should only be changing from the top down. In some sense, the denial of possible transformations at the bottom of the ice sheet is similar to the denial of geological processes or continental drift.

And now we know - indeed, the pictures show that there is a whole new exciting quasi-geological world at the bottom of the ice sheets. It's a beautiful discovery in a particular scientific discipline. It's also "just another story" we have to emphasize to fight against the people who have declared the "end of science" - and the "beginning of a new religious bigotry".

The ultimate theory of nearly everything, or TONE, may have been found, and we probably know what is approximately TOE, too. But its possible manifestations in various situations are uncountable.

But let me return to the climate models. Even if one fixes the directions from which the ice may grow and retreat, which will make at least the East Antarctic ice sheet much more resilient, it will still be far from being certain that the ice sheets are described correctly. There are lots of other things that the ice sheets are doing and we (and surely James Hansen) understand many of them incorrectly. Some of the flaws in the assumptions are known to some people; other flawed assumptions are not known to anyone.

The same shocks are repeatedly shattering with our ideas about mundane phenomena such as cloudiness as well as rarer phenomena such as lightnings - which produce positrons, among other things. In some sense, each of those comparable breakthroughs may change the predictions of important climatic variables in the future by dozens of percent.

What do you think that happens with our climate models after 10 such modifications? Just if you need the following identity, 10 times 10 percent is equal to 100 percent. In a few years or so, the predictions of pretty much everything may change their sign or double.

We only understand the things that we understand - at the depth (sometimes literally) and the level of accuracy at which we understand them. The previous sentence is a complete tautology and it would normally be vacuous. However, many people using the word "science" have mentally returned to the Middle Ages and the tautology is no longer trivial for them because they deny that there may be anything wrong about our understanding of the atmosphere, oceans, ice sheets, and their relationships.

Sometime in the future, children may know that there are growing subglacial mountain ranges - 2100 meters beneath the surface of Antarctica - just like some people know that the Earth is not flat today. They may laugh at their ancestors who used to think that what matters for the fate of the ice sheets is the air temperature 2100 meters higher - at the surface.

The thickness produced by the growth from the bottom may "only" be one half of the total thickness or less; but the changes of the flows etc. caused by the new paradigm are substantial.
Luboš Motl v 5:31 PM
Share