On Saturday, I urged the Russians to offer the Japanese some of the unpopulated Russian territories - which would also be safer places for nuclear power plants. It's a pleasure to inform you that one day later, on Sunday, Vladimir Zhirinovsky, a top Russian nationalist and an apparent TRF reader, has invited the Japanese to move to Russia. :-)

But that's not what I want to discuss here.

Daniel Holz of Cosmic Variance wrote a pretty good review of the events in Fukushima:

I found his text informative and balanced. However, he also included the worst-case scenario, dealing with a semi-realistic sequence of events culminating with a serious radiation threat to Tokyo. Susanne Reffert, a string theorist who works in Tokyo (her blog), was dissatisfied with this part of Dan's essay - was it necessary? - and even though I agree with Dan that those worst possibilities are not "strictly impossible", I can surely understand where she's coming from.


She is measuring the radiation level on her Tokyo balcony, finding no significant deviations from the natural background, and she must be upset by the surely exaggerated panic that has overtaken the media and the thinking of many people. By the way, it's true not only in Japan, Susanne. The panic outside Japan is particularly irrational, at least at this point.

Bill O'Reilly is reasonably skeptical about the media's anti-nuclear hype. To compare, he includes an insane ultra-hyped segment with Michio Kaku, who is a Japanese American, who has encouraged the Japanese PM (on ABC) to employ the whole country's airforce and bomb the Fukushima facility by rocks like in Chernobyl on steroids. :-)

However, Dan's best-case scenario punch line was equally provocative for many readers including your humble correspondent:


The best-case scenario, and probably most likely, is that the Fukushima-Daiichi plant will limp along, but without any catastrophic events (such as a major Chernobyl-style radioactive explosion and fire). The fuel will continue to cool, the fires will be put out, the amount of radiation will subside, and eventually the entire site will be entombed and become a testament to human hubris.

Will the Fukushima place become "a testament to human hubris"? Wow. Human hubris is, by definition, an arrogant overestimate of the human capabilities and competence. Well, I happen to think that nothing of this sort has been shown by the events in Fukushima. The Fukushima I power plant will be closed and retired. It may even be entombed. But we're doing the same thing with the humans after they die - that's what the concept of cemeteries is all about.

Do I see some hubris in cemeteries (like the extraordinary Mt Auburn cemetery I liked to visit a few times a year in Cambridge, MA)? Well, I see much more humility over there. And what about the cemeteries for nuclear reactors? Are they full of hubris?

Quite on the contrary, the Japanese physicists and engineers have showed that they're capable to design, build, and maintain amazing sources of energy even if they're built on the sub-optimal, seismically rich islands of Japan, and even if they're tested by the largest regional earthquake in at least 140 years whose magnitude wasn't expected.

The Fukushima I power plant could have been retired a month ago - but they just extended its license for additional years. Bad luck. But if you appreciate how much energy it has generated over the decades and how many lives it helped to improve, you must be proud about the human skills and competence. This pride is totally substantiated. I am proud even though I am not a Japanese nuclear engineer. Not even puppies and kittens managed to build something like that - and I do like them - and I am proud because I am genetically closer to the Japanese nuclear engineers than to the cute puppies and kittens. ;-)

Nuclear boy has a stomachache but he will get better. This video got about one million views within a day in Japan.

Audacity - which is a better word than hubris - is one of the qualities that makes humans special and that allowed us to do many things that other animals couldn't have done. We're the species of explorers, discoverers, inventors, and some of us are heroes. The humans could have been satisfied with eating bananas in the tropics throughout their lives. By this algorithm, they could have avoided Dan's accusations involving "hubris". But they decided to do other things, too. Sorry, Dan, but curiosity, courage, dreams, and creativity are what our species is all about. Try to join another species if you have fundamental problems with this quality.

The sensible humans will surely learn some lessons - general ones as well as very special, engineering lessons - but I surely do hope that the lesson that we should abandon all of our ambitions and audacity won't be one of them!


Czech power utility will profit from the anti-nuclear hysteria

The lady decided to show her muscles and close 7 German nuclear power plants. The short-term electricity prices jumped 23 percent and ČEZ will work hard to satisfy the demand. 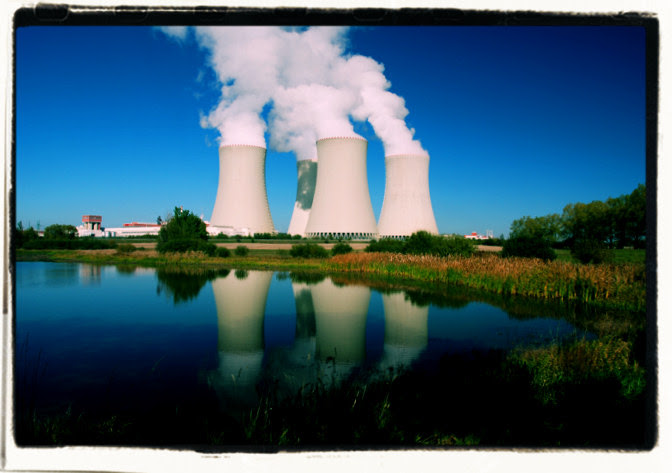 Temelín, the newest Czech nuclear power plant. Two new reactors are being planned and Fukushima has changed nothing about it

Unlike his German counterpart, Czech prime minister Mr Petr Nečas has explicitly said that what is going on is "media hysteria" and we will "not succumb" to it. In particular, we have no reason to shut down plants or conduct extra inspections at Czech nuclear power plants, our government's head stated. According to the prime minister, Ms Angela Merkel et al. have committed a cheap trick to make the public nervous.

The spokesman for ČEZ has correctly identified the recent EU move to "stress test nuclear power plants" as a "political phrase with no meaning".

Someone could say that the Czech prime minister is no dictator. We have other constitutional offices. For example, the president has to have a different opinion, right? Well, Prof Václav Klaus has used different words. He labeled the voices calling for EU nuclear restrictions "opportunistic populism". ;-)

Ms Merkel will have to realize that despite her anti-technological passions, she is no Adolf Hitler so no one in the Czech Republic is expected to pay a lip service to her idiotic green proclamations. Well, I say that the proclamations - and actions - are idiotic but polls indicate that 72% of the Germans agree that their oldest plants have to be closed immediately.