Fermilab Today has informed us about the latest verdict of the Illinois collider center about the Higgs mass. The chart looks like this:

You see that the masses below 114 GeV are excluded by direct searches by LEP, the European collider who lived in the same tunnel as the LHC before the LHC bought an apartment over there. Indirect precision measurements exclude Higgses above 185 GeV.


The Fermilab's contribution is the excluded blue bar on the picture above. For example, in the very middle of it, you may find the predictions by Alain Connes. ;-)

This approximately leaves the 114-156 GeV interval. Meanwhile, the ATLAS experiment at the LHC has analyzed some possible diphoton decays of the Higgs boson - see their future paper and PowerPoint - and look at the outcome: 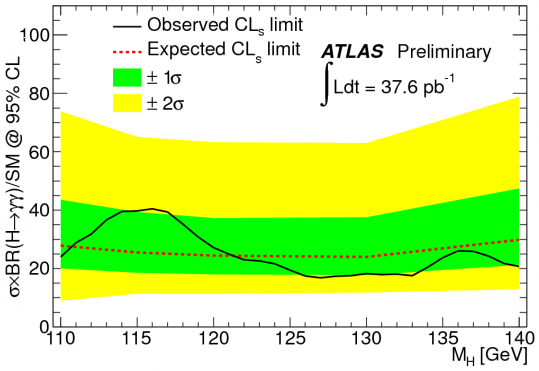 Now, I don't usually pay much attention to 3-sigma results (and sometimes even 5-sigma results must be considered critically) so you don't want me to hype 1-sigma results. Still, a Higgs below 120 GeV is getting more likely - by a factor of 3 or more - than a Higgs above 120 GeV. If the 1-sigma and 2-sigma bands were 3-sigma and 6-sigma bands, it would be a confirmation of something I still find to be the most likely outcome in the Higgs mass business.

Well, to be sure, D0 with 8.2/fb sees a nearly 2-sigma excess for the diphotonic Higgs decays below the 116 GeV mass, so in combination with CMS, one may get above 2 sigma.

By the way, the LHC has begun the 2011 collisions, click at Status at atlas.ch.

However, I want to offer you a hardcore rumor. A D0 and CMS experimenter with a complicated four-syllable female Indian first name and a simple one-syllable Indian last name resembling the name of Saddam's political party has claimed, during a CERN video press conference a week ago, that the CMS has produced something that would really shock me and most others - namely the evidence of the compositeness of leptons.

If that's true, then whoops. It would be a spectacular discovery that would be very likely to kill GUT theories as we know them - and many other related paradigms. Please, try to understand that the rumor is pretty likely to be false; it's not even clear that the Indian physicist meant what it seemed to have been, and even if she did, there are many other places where your skepticism may get healthily incarnated.