It is a year since Vít Klemeš is no longer with us. He took “residence on cloud no. 17” as he used to say. 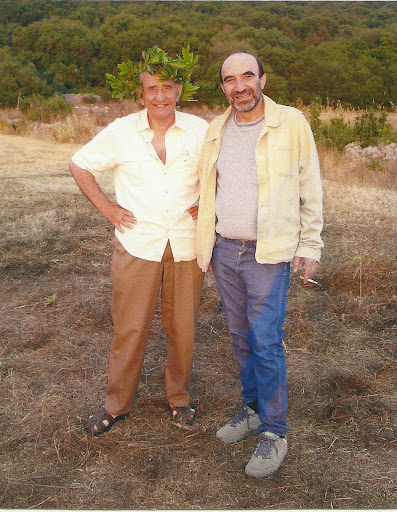 Vít Klemeš (left), laurelled by local admirers in the Greek island of Cephalonia in June 2005, with the humble writer of this guest post

Vít Klemeš was one of the world’s greatest hydrologists, as recognized, inter alia, by his awarding with the International Hydrology Prize (1994) (jointly awarded by the International Association of Hydrological Sciences (IAHS), the United Nations Educational Scientific and Cultural Organization (UNESCO) and the World Meteorological Organization (WMO)) and his election as President of the IAHS (1987–1991). He was born in Moravia and educated in what used to be Czechoslovakia (Brno, Bratislava, Prague). Following the Soviet-led invasion of Czechoslovakia, Vít and his family moved to Canada in September 1968, where he worked and lived until his death in 8 March 2010.

Vít’s involvement in science went far beyond hydrology. He had an informed opinion about broad scientific and philosophical issues. In addition to being a scientist and engineer, Vít was a conscious and active citizen of the world, having strong positions on all contemporary political, societal, economic and even religious affairs and problems. His recent book, entitled “An Imperfect Fit: Advanced Democracy and Human Nature”, is one of the testimonies of his activity of this type. Vít Klemeš was an unusual and unorthodox personality resembling more an ancient philosopher than a specialized modern scientist.

Some of his works were recently published collectively in a book with the manifest title “Common Sense and Other Heresies”. I have written the “Prolegomena” of the new edition of this book, jointly published by the Canadian Water Resources Association and International Association of Hydrological Sciences. There I have tried to provide a synopsis of his work and personality. Here I will let him speak providing a few quotations. 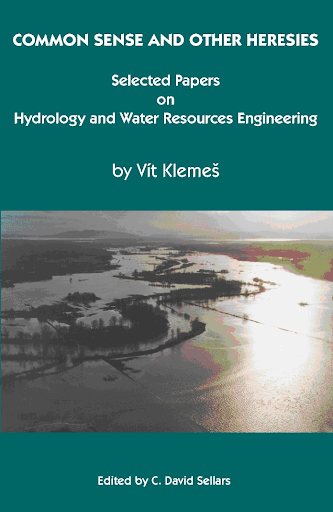 The cover of the new edition of his book, which has just gone to print

From his paper “Dilettantism in hydrology: transition or destiny?”; though he refers to hydrology, I think his thought applies to contemporary science in general:


The identification of misconceptions [common in contemporary hydrology] did not make them vanish, nor did it prevent emergence of others, nor did the revelation of their consequences have a strong retarding effect on their proliferation. Fighting them has been as difficult and frustrating as combating the legendary Hydra: as soon as one of its heads is struck off, two shoot up in its place.

From his last talk, entitled “Political pressures in water resources management: Do they influence predictions?”, which he gave in the International Interdisciplinary Conference on Predictions for Hydrology, Ecology, and Water Resources Management (Prague, 2008):


[P]olitical pressures often set the agenda for what is to be (or not to be) predicted, and sometimes even try to impose the prediction result thus transforming prediction into prescription.

Well, how anybody in his right mind could propose wasting precious resources on such petty things when political pressures command their use for the noble cause of saving the planet from Climate Change? But, could it not be that the present climate-change-impact models and all sorts of Al-Gore-ithms aimed at helping this noble cause will repeat the history of the noble causes of the past, like the previously mentioned environmental quality models or the ill-fated ‘socialist model’ meant to save the planet by imposing a ‘climate change’ on the social fabric itself?

From his book “Imperfect Fit”:


The more the reality diverges from the way prescribed by the ideology, the more ruthlessly it is forced in the prescribed channels and the more brutal are the means by which the noble ends are pursued.

From his presentation entitled “An unorthodox physically-based stochastic treatment of tree rings” at the XXIV General Assembly of the International Union of Geodesy and Geophysics (Perugia, 2007), which is perhaps the best testimony of his heretic humour—and certainly deserves a close look:


The most fun and perhaps the greatest value of doing something is in doing it. The results may well go up in smoke, be wrong, become obsolete and forgotten, but some new ideas may have emerged in pursuing them, and some of them may somewhere, sometime, bear fruit.

The last one is his anecdotal response to the Canadian Geophysical Union’s (CGU) request to sign the Climate Change letter, which on the occasion of 2009 Copenhagen Conference was addressed to the Government and Parliament of Canada. The letter begins as “At the Copenhagen Conference of the Parties to the UN Framework Convention on Climate Change, the eyes of the world will be on Canada. We, the leaders of the following Canadian scientific societies, urge the Government to negotiate an outcome that will rapidly and adequately address climate change.” Vít emailed me his reply and, since it bears his signature, I felt that I have his consent from “cloud 17” to make it public:

My answer is NO

The Draft reads like a document prepared by an alarmist pressure group, not by a scientific institution.

First of all, the introductory statement is rather arrogant in its exaggeration of Canada's importance in the world. Such self promotion can only hurt Canada's image.

The term 'climate change' is a misleading popular slogan. Climate has never been stable but has been, and will continue to be, changing, regardless of human interventions. The issue is the rising temperature as is after all obvious from the second paragraph where all the effects listed refer to temperature rise. The first sentence of the second paragraph should thus be reformulated accordingly. Moreover, "Some current and anticipated impacts..." would be a more honest statement.

The statement "...that greenhouse gases resulting from human activities have contributed to the warming of the atmosphere..." is trivial – even Suzuki's and Al Gore's farts "contribute" to it. No "rigorous international research" is needed to establish this. The issue is that human contribution has not yet been rigorously quantified and, until it is, nobody can tell how "serious risk" it represents. It is the quantification of the various effects where rigorous research is needed and where Canada could perhaps make some contribution.

The statement "Human activities must be optimized to significantly reduce emissions..." is logically inconsistent. One cannot prejudge that "optimization" of human activities (whatever that is) will necessarily require a "significant" reduction of emissions. Given the finite resources, "optimization" must balance the economy with the management not only of CO2 emissions but of other environmental pollutants such as, for instance, toxic substances released into soil, water and atmosphere. To concentrate solely on CO2 reduction hardly qualifies for "optimization" and "responsibility".

The exhortation "We must act now" is cheap unless accompanied with responsible proposals and priorities for action. And this is what Copenhagen should be about! Your exhortation implies that the participants would not know this unless reminded by your outcry.