Why humanoids are not used in Fukushima?

Update II from Fukushima: Two days after I tried to invite all robots of the world to work in Fukushima, Red Moni-Robo (monitoring robot) has finally arrived to the nuclear power plant and began his or her or its monitoring job. 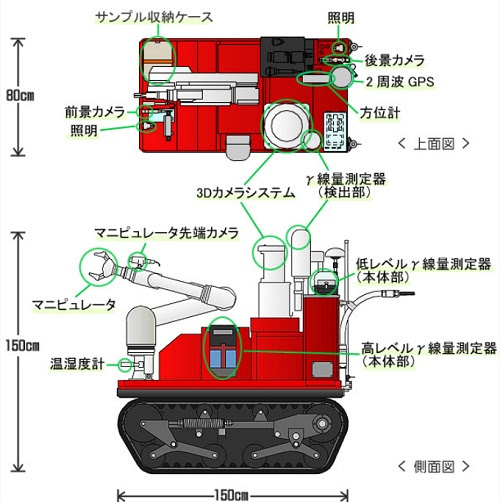 Update I from Fukushima I: Tokyo Electric Power Co. is going to install a new power line and TRF predicts that the nuclear alert is going to fade away as early as tomorrow.

This video is 4 years old or so:

In 2003, Asimo has also met Mr Vladimír Špidla, a former Czech prime minister (whom I met years later in Boston when he was an EU commissioner - i.e. the most well-paid Czech politician - and spoke no English), during a dinner with the Czech and Japanese prime ministers and after having attempted to start an intelligent dialog with our leader in a perfect Czech, he or it has unmasked Špidla's staggering lack of humor.

Honda Asimo is just one of the famous brands among many robots and I am pretty sure that Japan is the world's leader in this kind of technology - although Albert Hubo, who is Jewish Korean, is not bad, either.

Today, there are about 100 Honda Asimo units in the world. Each of them took USD 1 million to be manufactured.


This may sound like a black humor but this topic is serious and I am serious, too. The heroic workers at the Fukushima power plant who demonstrably work in an unhealthy environment must be applauded. But wouldn't we expect Japan to find a solution that is a little bit more high tech?

I am not talking about artificial intelligence. I am talking about remotely controlled robots who can walk, press buttons, and move objects. And who just don't care about a couple of millisieverts - and maybe even a few sieverts - that they may receive. Those robots should seriously be ready for similar events.

Analogously, the helicopters should be remotely controlled; some helicopter plans were recently abandoned because the radiation above the power plant was too high. I can't believe that such actions still require the personal presence of humans who receive unhealthy doses of radiation and who can always try to escape from their job that no one is jealous about right now.

Much more generally, I am convinced that there exist many sensible solutions of the problem in the world that are just not being used. The power plant is 40 years old but shouldn't the mankind be a little bit more technologically advanced these days?

In 1998 or so, I was eating a Wendy's hamburger in the Busch Campus Center of Rutgers University in Piscataway, New Jersey. Suddenly, an unexpected guy began to talk to me. He was about 4 feet (120 cm) tall and he shook my hand. After being told that I was Czech, he switched to a discussion about Mr Milan Kundera and Czech literature that he was more familiar with than your humble correspondent. The discussion, in which he used his funny robotic voice, continued with the uncertainty principle and the history of quantum mechanics. He was still remarkably intelligent when it came to those matters.

Needless to say, I was impressed. He was not only short but he had no proteins in his body. Well, let me say it openly: he was clearly a robot! That didn't prevent him from walking, rotating his head and arms sensibly, discussing many issues more rationally, creatively, and playfully than a vast majority of the humans I knew ;-) and from understanding my idiosyncratic version of the Pilsner English accent much more reliably than a vast majority of the Yankees I have ever met.

It was just amazing. Had the artificial intelligence made such an amazing leap, I was asking myself? Well, to be honest, it took me many hours before I figured out a sensible hypothesis what was actually going on. After some Internet searches on the following day, the right answer became clear: it was an electronic personality, a robot that was remotely controlled.

About 50 meters from the two of us, there was a guy who had a lot of fun. His screen was showing him what the cameras in the robot's eyes were observing, and he could speak - while his voice was being distorted to acquire the appropriate robotic accent. And of course, he could control the motion of the robot in various ways and detect other things that the robot was seeing and hearing.

That's more than a decade ago. Now, in 2011, superficially similar machines could be enough to fight with one of the world's worst environmental threats of recent decades. But the humanoids - and robots in general - are strangely absent. Why? The solutions to the Fukushima problems are going to strongly depend on the human factor. That shouldn't be the case.

I think that robots should be able to tell us many details about the state of the reactors and rods in them, among many other things. Doesn't someone in Japan (or elsewhere) have devices capable of doing such things that he or she could lend to the folks in the power plant?

In fact, I believe that an important problem is that the solution to the nuclear hassle is up to the nuclear experts who are highly competent but they are used to work restricted by serious financial constraints. They should be allowed to order gadgets technologies for billions of dollars - because the value of a full solution would be counted in billions of dollars.

By the way, I asked Honda representatives why Asimo is not helping over there. The answer:

Thank you for your email. ASIMO is still in the research and development phase, but Honda hopes the robot will be a helper to people someday, perhaps even in dangerous situations like this. If you'd like to learn more about ASIMO's current capabilities, please visit http://asimo.honda.com.