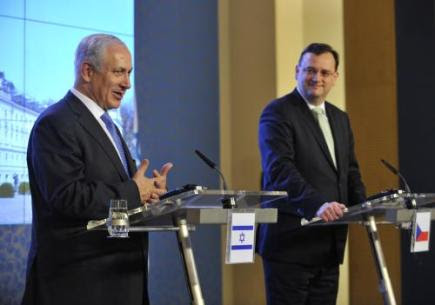 Today, he met Mr Petr Nečas, his Czech counterpart. Tomorrow, he will have a lunch with President Klaus.


Both prime ministers have vowed that Czechia and Israel will strengthen their co-operation in science, research, as well as the military industry.

During the press conference, the Czech prime minister criticized the so-called Goldstone Report as "biased from the very beginning, unobjective, and misleading in many respects." In his opinion, future reports should learn a big deal from Goldstone's failures.

Netanyahu welcomes the potential co-operation in those areas. "I would also be pleased if many more tourists were coming to Israel," he added. Needless to say, a much larger percentage of the Czech tourists visits various Islamic tropical destinations. ;-)

Czechia, an unambiguous ally of Israel, is also supporting development projects on the Palestinian territories.

Netanyahu praised the Czech "courage to stand on the side of the truth, even at a time when the attacks on Israel are based on lies." He said that it is a "question of morality, rightness, respect, and dignity" and allowed Mr Nečas' country to "become a role model for many other democracies."

Mr Nečas noted that the strategic EU-Israel partnership must not be constrained by conditions of any progress in the Israeli-Palestinian negotiations - a message addressed to the likes of Ms Merkel. He also noted that Czechia has diplomatic relations - and participates in debates - with Arab countries.

"Israel's economy is an enormously innovative one - one based on science, research, and innovations," Nečas noticed, "which is very inspiring to us." The existing co-operation in applied research should be extended, much like the contacts between the universities. Our country is carefully observing "technological incubators" in Israel with some degree of fascination. 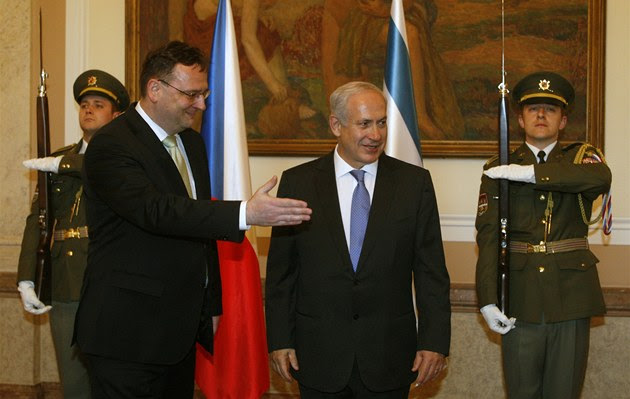 However, in Prague, Netanyahu could soon announce something unexpected for the Arab comrades, namely the success of Israel's new Iron Dome anti-missile system. Today, it successfully liquidated two (real) projectiles from the Gaza Strip.

The success came despite the fact that the system had not been previously tested. The Israeli prime minister had good reasons to boast - and he has generously used this opportunity. ;-) However, he emphasized that the success rate of the anti-missile system - even though it may improve the Israeli civilians' security - can't reach 100 percent.
Luboš Motl v 9:20 PM
Share