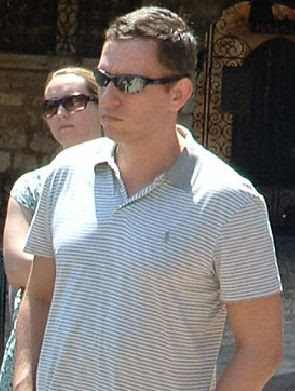 One of the world's most ingenious venture capitalists, Peter Thiel, the father of PayPal and the first major Facebook investor, believes that the air from the subprime bubble has already been moved into another, perhaps more long-lived bubble waiting to be burst, the higher education bubble.

What do I think? Well, I completely agree. People are wasting way too much money and time with formal education and degrees, especially when it comes to degrees at expensive universities. Both at the global level and the Czech level, the number of college degrees people pursue is unnaturally high.


By the way, if you ask how I took the picture of Peter Thiel, well, I was just walking on a sidewalk near my concrete block and a superfancy Mercedes suddenly stopped nearby and took me to the airport. So I was suddenly walking around a castle in Nice, France, and Richard Lindzen just happened to be taking a picture of Peter Thiel and other famous faces, so I took my copy, too.

How many readers would think that I am just making it up? ;-) I assure you that your humble correspondent is unable to lie.

But back to the main story. There is a certain fraction of people in the society who are actually able to learn certain complicated things at a high enough level. There is also a limited amount of work that the society needs to be done and that require college or higher education. And there is a limited chance that the particular stuff that the people learn will be useful for their future source of income. And there is a rather small difference in the things you may learn at different possible places.

When it comes to all these limitations, it is pretty clear that the people are spending way too much time in colleges. First, too many people are trying to get degrees in various disciplines which inevitably drags the average quality of the members of these communities closer to the bottom of the sea.

Second, there is still a lot of simple work - that doesn't require any PhD and not even lower degrees - that the society needs to be done but there's no one who expects to do such jobs. Third, most of the stuff that the people learn in the colleges is not directly relevant to what they're doing later. And fourth, the advantages of an expensive or famous college or school turn out to be largely inconsequential for the money-producing occupations.

Respect for education has become one of the clichés that a large fraction of the society has adopted but it has been mixed with political correctness. After all, everyone is equal, so if one combines these two insights, it follows that pretty much everyone should struggle to get a college degree if not a PhD. But should she?

It has become almost heretical to ask such a question. However, this question should not only be asked but the likely answer for most people is No. A typical person spends a significant portion of her life with similar activities and those years can't really be regained afterwards because macroscopic processes are irreversible.

Some people such as Lexington of the Economist who disagree with Thiel show graphs that demonstrate a huge correlation between the average income and the level of education. 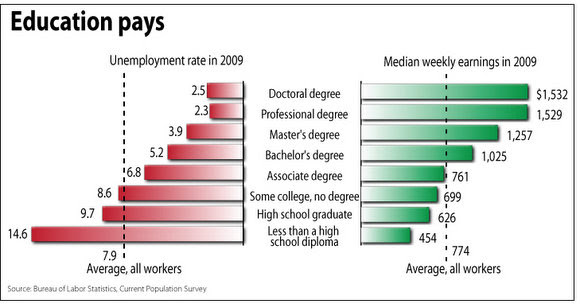 However, what this argument overlooks is a well-known wisdom that


Correlation is not causation.


If A (higher level of education) is correlated with B (higher expected salary and lower odds of unemployment), it doesn't mean that A is a cause of B. Even if the correlation is such that it is unlikely to have arisen by accident, it doesn't mean that there's any direct causation between A and B.

Naively, you could think that either A caused B or B caused A. However, it's not true. There is a third possible explanation - namely that both A and B were caused by something else, namely C. This largely applies to this case as well - and C is mostly the "innate aptitude" or something similar that existed before the decision to acquire or not to acquire a college degree. The talented people are likely to have a higher income whether or not they get a degree - but they are also more likely to get a degree so these two consequences of their talent will end up being correlated with one another even though there's no direct causation in between them.

But there is one more reason why the graph above doesn't disprove the idea of a higher education bubble. This bonus reason is that the higher education bubble exists on the side of the employers, too. I think that it's not just the consumers - the students who pay tuition - but also the employers who are still overestimating the value of the degrees, even though less so than the payees of the tuition.

Well, an employer surely wants an employee who is good at whatever work he is supposed to do. This requires some talent, eagerness to work hard, and some ability to deal with the co-workers, business partners, and environment, to adapt, learn new things, and so on (I have surely missed some important issues). And those things are largely correlated with the level of education, too.

However, sending a person to a 5-year or 15-year process of higher education is not necessarily the most effective method to figure out whether he is good at something much more specific. Chances are that an employer may find out whether someone is appropriate by much more effective - and much more accurate - methods than by looking at degrees in the applicant's CV.

In the previous paragraphs, I have largely discussed jobs that are a "preparation for life". However, there also exists a more inherent side of education, one that is obviously closer to my heart. John Dewey has said


Obviously, knowledge of many things has an immense value by itself, regardless of the economic consequences. You don't expect a string theorist to say anything else - or to have a lower respect to pure knowledge, do you? Nevertheless, I think that even many (or most) high-energy theoretical physicists are doing their job just like people are doing any other job - as a source of income that is convenient enough, without any special emotions.

Fine. So liberal education and teaching of pure science is needed, isn't it?

Except that even in this spiritual realm of education, there should still exist some efficiency in the process of teaching and learning. Even if you forget about the money, it's questionable whether the time - the lives of the people - is being invested properly and efficiently. The most straightforward way to quantify the question whether time is being wasted is to convert time to money according to the "time is money" law and let the people optimize their money again. But even when this is not done, people should try to think rationally whether they're doing the right thing.

A special discussion is required to discuss tuition and the differences in its magnitude at different places. I have been largely educated in the socialist (and post-socialist) system where education was (and still is) free - and the socialist propaganda would emphasize this point about tuition (and personally paid healthcare) in the evil capitalist system whenever it could.

Well, I think that tuition may play a helpful role - and in some contexts, it is literally an investment and the students should pay some money for the investment, at least to cover a big part of the expenses. The school's chance to obtain more money from the excited students (and their parents) is exerting pressure on the school to increase its quality which is good. This is intuitively the case for law schools or management schools that prepare the students to earn some big money.

However, would I recommend someone - who is not a multimillionaire or their son or daughter - to pay tuition around $40,000 a year or higher? Especially if you discuss physics? I wouldn't. I find it crazy. There are many things that I have learned at schools. There are many more things I have learned outside the schools. When all those things are reasonably quantified, I don't think that the schools were as useful as hundreds of thousands of dollars.

In reality, people are paying money for the studies in sciences because they expect long-term employment in the field.

Alternatively, you may divide the tuition to individual lectures and you would get dozens of dollars for every single hour-long lecture. Isn't that too much? I can imagine paying $10 for some good lectures - but every lecture, with a topic defined by someone else and with a very variable quality? I don't think so. People never make this comparison with other ways how the dozens of dollars may be spent. That's why the tuition ceases to be a regulating mechanism pushing the subjects to behave economically or rationally.

Some people don't mind if they're being bored while sitting in a class where most of the information can either be learned much more quickly or should be learned more slowly (and/or in the solitude of the homes), or you don't care about it all (especially because you could learn some of the "details" later if you needed them which is unlikely), is just a waste of time. Of course, the teacher has to be paid but for the student, it's often a lot of work, too. Does he always appreciate the time invested to such things?

Various colleges have totally different flair. Almost no one in the West knows Charles University - but after a decade in the U.S., I am confident that the undergraduate education in Prague is pretty much equivalent to that at Harvard or elsewhere - if not better. The inferior quality of the research environment kicks in at the graduate level.

But at the graduate level, it's still true that e.g. the physics PhD program at Rutgers is not that different from the corresponding program at Harvard even though Harvard is much more famous a school. At the postdoc level and faculty, Harvard is arguably a stronger place - even though it wasn't the case in the mid 1990s when Rutgers and Santa Barbara were the main machines driving the Second Superstring Revolution (before the traditional top schools sucked most of the top brains).

However, does it really matter whether you become a PhD student at one school or another? There's a lot of worshiping of the brands. It's a special feeling to be excited e.g. about the brand of Harvard (much like some teenagers worship Nike or another brand - something I could never understand). I remember my excitement (and songs) in 2001 when I became convinced, after the interview in the Harvard Society of Fellows, that I did well.

But this kind of excitement fanned by some superficial knowledge - while an interesting portion of human emotions - is exactly what is ultimately producing bubbles. In reality, even when it comes e.g. to the income of the professors, the gap between the top schools and the more generic schools is much smaller than the gap in their brands - and gap in the tuition that people are ready to pay. In my opinion, this is irrational as well.

Moreover, the gap between the brands' influence isn't large in many other contexts. This is why I don't think that famous universities may save otherwise falling quality of research. When I learned five years ago that laymen interested in fundamental physics are ready to pay as much attention to a stinky and idiotic computer administrator with 0 contributions to science at a not-stellar-class university as they would pay to the big shots from the world's most famous university, I have learned my lesson. The brands really don't make any difference - and it is primarily the people who waste for expensive tuition who think otherwise.
Luboš Motl v 1:52 PM
Share