However, an Israeli physicist and TRF reader has already pointed out a problem with the data. Others have pointed out that the would-be discovery goes away if the energy of jets is shifted - the effect could be just mismeasured energy. (Via Lisa Randall.) 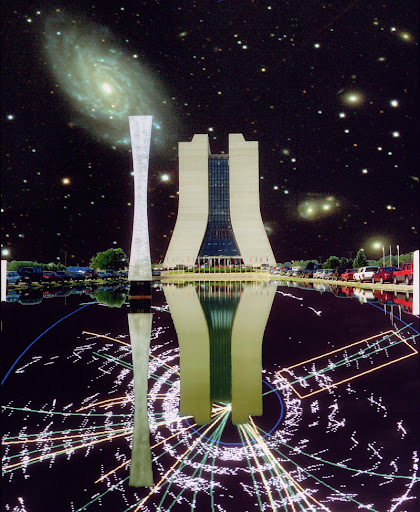 Tonight, at 11 p.m. Central European Summer Time or 2 p.m. Californian Daylight Saving Time, Ms Viviana Cavaliere will give a talk at the Fermilab:


The title is enough for the experts to understand the channel where the Fermilab folks have seen the new three-sigma "bump": the birth of the hypothetical new particle - which decays to two jets - is bizarrely accompanied by the production of a W-boson (decaying leptonically). Dennis Overbye at the New York Times has revealed that many top physicists view the bump as a big thing:

It's being marketed as a new, unexpected version of the Higgs boson with mass around 144 GeV (technipion from technicolor theories - see a paper by Kenneth Lane et al. tomorrow), a new force such as one from a light leptophobic Z' boson (it's not a prediction - this hep-ph paper written a month ago tried to explain the top-antitop asymmetry but it already knew about the "today's" signal from Viviana Cavaliere's thesis, too), stop squark in R-parity violating (i.e. ugly version of) supersymmetry, and so on. It can't be a Standard Model Higgs because that would be decaying to a bottom quark-antiquark pair.


Lisa Randall and especially Neal Weiner are quoted as the enthusiasts; Nima Arkani-Hamed doesn't disappoint and remains a cautious conservative skeptic he has become in recent years. ;-) In Nima's opinion, the result is probably an artifact of how the data were sliced, diced, spliced, mashed, and splashed. If someone cares, radical communist and feminist Tommaso Dorigo is being conservative, too.

On Thursday, an Israeli physicist commented on TRF that the main peak is incorrectly shifted by one bin - so the whole observed effect may be a pile-up effect. That's a more detailed version of Nima's "splicing" comment.

Joe Lykken who has also written Z' boson SUSY papers and who is quoted at the end doesn't avoid the comment that the discovery - with the amount of data that is 4 times larger - could appear around the day when the Tevatron's funding stops in Fall 2011. In this way, Lykken reminds us that given the important looming changes in the funding, experimenters around CDF spokeswoman (to use a politically correct language) with an optional penis Giovanni Punzi could naturally become "more sensitive" to similar "bumps".

While a "splicing dicing artifact" is a likely option, I am not going to claim that it is impossible for a new Z' boson to be this light and have the required properties. If such a new particle exists, however, it will be another stunning example of "Who ordered that?".

To be sure, additional U(1) gauge groups - even the leptophobic ones - are mundane in grand unified theories and string theory models. In some sense, their existence could be viewed as a "generic prediction" of those structures. Except that there is some kind of minimality or Occam's razor that persists in our - and my - beliefs.

The real question is: Why? There's no excessively good reason for the Z' boson to exist and no reason for it to not exist. We just usually prefer to believe in the non-existence unless we have a reason to do otherwise - unless we see a role that such a new particle could play. We don't know of such a role.

Of course, that doesn't mean that the particle can't exist. It surely means that such a new fifth force would remain a fifth wheel for some time. Imagine - people would say that there are five basic forces. One of them holds galaxies together and keeps us on the Earth; the other is responsible for all of chemistry, biology, and material science, not to speak about electromagnetic communication; the third force keeps atomic nuclei together; the fourth force causes some nuclei to beta-decay; and the fifth force adds 250 bizarre events at the Tevatron. ;-)

I am exaggerating and oversimplifying a bit. As Paul Langacker argues, Z' bosons could be good for an extended Higgs sector, which may be desired for various reasons; they could solve the mu problem in supersymmetric model building; mediate SUSY breaking; and add interesting yet dangerous predictions of flavor changing processes and new interactions with dark matter. The string-derived (beyond ordinary GUT) Z' bosons have also been claimed to be essential for light neutrino masses and proton stability. 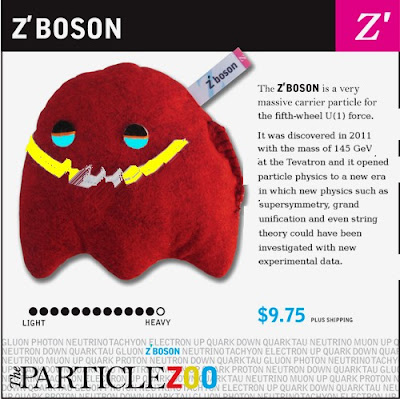 If you read this 2000 paper, it's easy to see how a discovery of an appropriate Z' boson could provide us with solid evidence for string theory - long before evidence for SUSY or GUT themselves. However, this particular paper claims that Z' has to be heavier than 500 GeV. Note that they use the observed small B-meson mass difference, and not stringy arguments, to argue that Z' has to be above 500 GeV.
Luboš Motl v 6:36 PM
Share