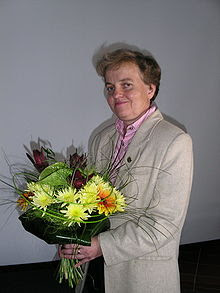 Your humble correspondent has just returned from a talk by Dr Dana Drábová who came to Pilsen - the Mother of Cities - to explain lasting as well as current issues surrounding nuclear energy. She is the chair of the Czech State Nuclear Safety Authority. And I was extremely impressed.

I have always known that she was immensely competent - a few sentences on TV are actually enough.

But a nearly two-hour talk including a segment with questions and answers is needed to see how much competent she really is. The impression becomes particularly striking if you compare her e.g. to Bc Jill Hoggan who is the EU climate tax czar (something that is being planned to become a bigger industry than nuclear energy itself) and who wasn't able to answer a single basic question about her "sector" during an interview in Australia, especially not the quantitative ones (e.g. how much it costs and what brings us).


Dr Drábová is a very different kind of chair. When you listen to her, you will have no doubts that she deserved her nuclear energy PhD.

She began with pictures and graphs showing how important electricity is for the living standards of a modern society. A 2003 blackout on the U.S. map looked like Gulf of Mexico II around the New York City. When you don't have electricity, clean water, cheap food, and many other things have to go, too.

The human development index (HDI) is a dramatically increasing function of the energy consumption per capita as long as the latter is small enough. When it's large, the HDI becomes somewhat constant, indicating some potential for savings.

She argued that in the next 20 years, the energy consumption is guaranteed to increase because of the increasing world population. At the same moment, renewable energy sources are very likely to remain a negligible fraction. Lots of graphs, numbers, and tables followed. She was comparing various parameters, indicating how cheap various sources of energy are, how much space they need, how much time they need to produce the energy invested during the production of the power plant, how many people they kill, and so on.

Needless to say, the numbers were showing that nuclear energy was the winner. But unlike your humble correspondent, she wouldn't be screaming. She was expecting that the audience is able to extract the message from the tables - the number spoke a clear language. Still, she was open-minded about the possibility that some other sources, especially fossil fuels, are superior from some viewpoints.

Obviously, the number of fatalities caused by nuclear energy is negligible. While natural causes kill 10,000 people per million every year, and various kinds of common accidents add hundreds or thousands, nuclear energy kills 0.1 person or so (one part per ten million). The table also contained some CO2 emissions fatalities - about 1-3 per million. Well, I think that any positive value of this number is very problematic but still, the number is tiny.

But her strength was most obvious when she discussed the reactor technologies and details about the accidents. My feeling is that she is familiar with the technical details of the 400+ reactors that are running in the world - and especially with the safety measures around them. So in the questions-and-asnwers segment, she could also crisply and comprehensibly describe the generations of the reactors, their relationships, and many other things.

Quite generally, she was able to answer any question.

Nuclear accidents were ordered on the INES scale. She presented the basic rules of nuclear safety - 1) turn it off when you have any problems, 2) continue to cool it (residual heat etc.), 3) preserve the isolation of the radioactive material by the barriers.

The Three Miles Island accident was described as an example of an incident that worked as it should have. However, much more time was dedicated to Chernobyl, its design flaws, and especially the errors of the operators which were most painful. Many maps of radioactive fallout appeared on the screen.

In particular, we learned that despite the greater distance, the Austrians received about 3 times higher doses in May 1986 than Czechoslovakia did - because the higher elevation contributed in the undesirable way. A part of the Austrian farmers' modern anti-nuclear sentiment may be explained by the damage that Chernobyl caused to their economic cycle "meadows - purple cows called Milka - chocolate".

A similar amount of detailed data were showed for Fukushima. The first photograph looked like a nice picture of the plant how it looked one month ago. Well, not really, she noticed, it was no longer this nice at this time of the day. She corrected "one month" to "one month and six hours". :-)

Some discussion was dedicated to the public opinion, the nuclear renaissance that is remaining on the paper, and lots of other things. In her talk - and also after some question - she discussed the German decision to stop their 7 nuclear power plants built before 1981. This decision has further energized the Austrian anti-nuclear farmers.

Someone asked her whether she knows how Germany plans to deal with the missing energy. A man in the audience claimed that the Germans are so rational, aren't they? She answered exactly as I expected and as I would answer: Germans are clearly not behaving too rationally right now, according to the available data. In her talk, she already showed that before they stopped the 7 plants, the country was a clear energy exporter. After the shutdown, Germany became a relatively clear energy importer. There's clearly no realistic long-term policy in place.

By watching her face expressions, I would bet that at the beginning, she was afraid that the bulk of the audience would be anti-nuclear warriors - and that's why there were so many people. Because of the hundreds of extra people that the organizers didn't expect, the room had to be changed and the talk began 10 minutes later which was good for me because I came 7 minutes late (because of an underestimate of the walking distance of the university campus).

I would have guessed correctly that even 1 month after the Fukushima hassles began, the audience would be largely pro-nuclear. And my expectations were totally confirmed. Most of the positive pro-nuclear attitude is due to the rational arguments - but even when they're scarce, it's just "not cool" in the Czech academic circles to be anti-nuclear.

There was one young guy who asked a question with some potentially anti-nuclear subtext. We learned that he has heard that the older among the two Czech nuclear plants, namely Dukovany, doesn't have any container or something like that. Her face expression changed abruptly in a way that ignited a giant laughter in the room - and indicated that her calm, unemotional attitude to "nuclear energy yes or no" may be a partly artificial image.

If she were Ronald Reagan, she would have said "there you go again." At any rate, she immediately knew the best way to answer the question. She took one of the slides in her PowerPoint presentation - one with a scheme of the Fukushima plant - and she said that despite a different internal technology, the outer containers are pretty much analogous.

She was able to perfectly answer all of the dozens of question - even though one of the answers to a prophetic question was "I don't know" - and people with some physics, hard science, or engineering background who take their background seriously couldn't have any doubt that she is one of them.

As you may expect, I was trying to catch some technical imperfections, but it was hard. When she was talking about the March 11th Japanese earthquake, she would say: "I apologize for this trivality that most of you may know but the Richter scale is a log scale [so far so good], so the difference between an 8.0 and a 9.0 quake is a factor of 10 in the impacts."

Well, it is a log scale but the factor of 10 only applies to the amplitude of the seismometer; the actual energy released by the quake goes like the amplitude to the 3/2-th power, so 8.0 and 9.0 release energies that differ by a factor of 10^{3/2} = sqrt(10) x 10 = 31.62. But that's clearly just a detail and chances are that she is familiar with the Gutenberg-Richter relation, too.

Bonus: a king crab and SUV will destroy cancer research

University of Alabama at Birmingham has made an important discovery about the shocking impact of your SUV:

It is a fresh discovery that just appeared on the uab.edu website but there is already a scientific consensus about it. The story is that your SUV produced CO2 emissions that heated up Earth. Mr Sven Thatje, Ph.D. saw one crab, Mr Crab Crabowitch Crabow, as it climbed a slope in Antarctica. Mr Thatje has observed Mr Crabow's ancestors for 40 million years and they have never climbed the same rock.

The evidence is clear: the crab was climbing the slope in Antarctica because of your SUV emissions. Both events have occurred, so it is clear that the SUV must be the cause. The debate is over. Also, the climate models make it very clear what it will lead to.

Mr Crab Crabowitch Crabow and its grand cousin will eat other animals such as sea squirts that cures skin cancer and other species that would surely lead to the discovery of a universal cure for cancer in April 2018. However, all climate models agree that Mr Crab Crabowitch Crabow who was climbing the slope will make this discovery impossible. And all of it was caused by your SUV.

The professors of biology argue that the CO2 emissions have brought havoc to Nature: animals suddenly became cruel and some of them have even started to eat other animals instead of being the same liberal vegetarians they have always been. In fact, another endowed biology professor has observed a cat eating a bird in Alabama. Even more seriously, the ecosystems could change and the organisms could be forced to adapt or evolve. This is also unprecedented: since the birth of the Earth, animals have never changed their habitats, habits, and properties, as proved by Radwin's No Evolution Theory.

You see that this is like in a science-fiction movie: the mankind has totally changed Nature; Nature began to change, something it would have never dared to do because any such evolution would have offended the face of God.
Luboš Motl v 7:55 PM
Share