Should we be getting used to light supersymmetric 7 GeV photinos?

A fascinating, full-fledged war has erupted between the teams trying to detect the dark matter particles here on Earth. The two opposing armies of experimenters are called "Dark Matter Is Seen" (DMIS) and "Dark Matter Is Not Seen" (DMINS). 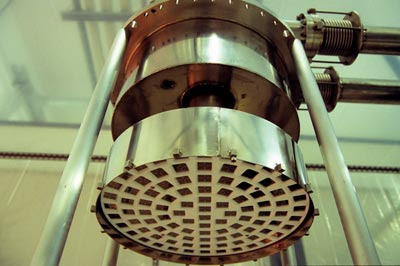 Each of the camps may be right.

Of course, the first team has a more interesting message. ;-) One year ago, I discussed observations by CoGeNT (of the DMIS coalition) that may have detected hundreds of bino-like 10 GeV dark matter particles. Such claims are directly contradicted by the DMINS axis - CDMS, XENON10, XENON100, and maybe others - that claims that there is nothing to be seen and the DMIS coalition - including CoGeNT, DAMA, PAMELA, and others who have suggested the existence of a signal - are conspiracy theorists. After all, DMINS may measure things much more accurately and there's nothing to be seen! ;-)

The CoGeNT-CDMS (sado-maso) war is particularly violent because both opposing teams use germanium and they're located in the same mine.

Even more impressively, they have acquired a 2.8-sigma evidence that the signal is actually annually modulated - it depends on the seasons. The existence and significance of this modulation is in striking agreement with the prediction by Chris Kelso and Dan Hooper from November 2010. 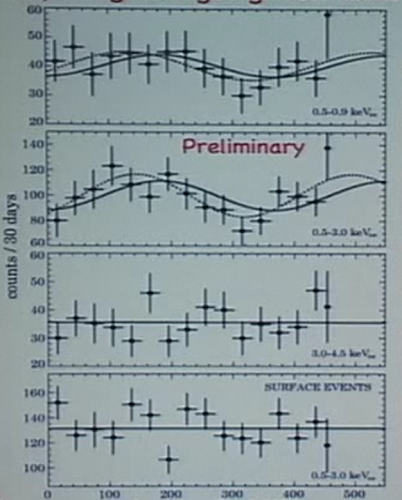 In the dark matter context, this modulation may be explained by the Earth's changing speed relatively to the dark matter halo around us. You may see a fresh 30-minute talk (48 minutes in total) about the newest CoGeNT result by its main boss, Dr Juan Collar.

I agree with Jester that it's likely that one of the coalitions at war is likely to be essentially right, so the other one has to be wrong. Their methods differ a little bit - what kinds of events are being removed. So it's likely that the DMINS axis is filtering out some events that resemble "not dark matter collisions" even though they're actually caused by the dark matter.

It is conceivable that this dispute will be solved very soon. Meanwhile, all theorists should morally prepare for the possibility that there is a dark matter particle whose mass is 7-8 GeV - it is far from impossible given the contradictory facts. Various peace negotiators have proposed a resolution that essentially concludes that the 7-8 GeV signal is genuine.


She fell from the skies: a theme song of the day


There are children on the Earth; the Earth is flying through the space; it's not being occupied by orbiting atoms only. The stars are also hiding children who are playing, maybe in the same way as we do. Chorus: Full of kids are those worlds that we're dreaming about every evening. We will sit in a spacecraft and we will fly fly fly fly to visit them. ... A rocket of those children is probably already flying here, maybe it will land tomorrow in the morning. On the border of the forest, they say it will be dropping towards the Sun, and it will stay on Earth forever. Chorus: Full of children are those worlds that we're dreaming about every evening. Once they will sit in an aircraft and we may see see see see see see them when they will arrive to pay us a visit.
"Spadla z oblakov" is a 13-part 1978 Slovak (well, Czechoslovak recorded in the Slovak language) TV soap opera for children. Miss Majka of planet Guru lands in the High Tatras, Slovakia. She starts to speak German but reloads her Slovak localization software. She can walk on the water, walls, speed up time, and so on, but otherwise is a cutely naive girl that is learning many things with the Slovak kids.

Some time ago, CoGeNT wanted to disprove the annual modulation previously seen by DAMA. Instead, it was forced to join the coalition. We may really add HEAT, CAPRICE, MASS, and AMS-01 to the DMIS coalition because they've seen some excess of positrons above 7 GeV which could also be produced by pair-annihilation of the 7 GeV dark matter particles although the typical interpretation used to be different.

CRESST-II is also in the DMIS coalition and is likely to publish a 4.6-sigma excess of O(10 GeV) WIMPs, too.
Luboš Motl v 8:33 PM
Share