On Friday 13th, Czechia lost in the semifinals to Sweden - the first loss - so much of the optimistic and self-confident tone below has been rendered obsolete. ;-)

But let's get back.

Much like most Czechs, I am watching all matches of our team on the 2011 World Ice-hockey Championship in Slovakia. 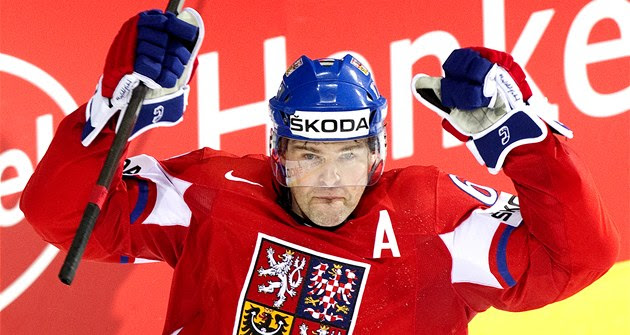 The final score may indicate otherwise but this quarter final match was extremely dramatic.


The Czech team - one that defends the gold medals - won the first six matches of the tournament - it didn't lose a point against Latvia, Denmark, Finland, Slovakia, Russia, and Germany.

Russia had to experience a defeat on their Victory Day, May 8th, while this historical irregularity was partly fixed on the anniversary of the liberation of Prague, May 9th, when the Germans were beaten again (5-2). ;-)

But those six matches didn't play any role whatsoever in the quarter final.

In the play-off system, you lose once and you go home. Moreover, America was full of energy. The U.S. team is, in average, 4 years younger than the Czech team. Their simple game patterns and the ability to constantly attack and threaten our players has been scary throughout the first period.

Could they sustain this amazing speed?

Fortunately, the answer turned out to be No. ;-) Already during the first period, Jaromír Jágr scored a goal, 1-0. Jágr is 39-year-old and he's finally getting a little bit mature and experienced. I guess that in 10 or 15 more years, he may become a pretty good player. One sign that he is already an adult player is that he prays after each match and he eats a lot of Tatranka and Mignonka chocolate bars. He also insists on having simple black hockey sticks, not to speak about his legendary number 68.

But, as the climate articles on this blog have occasionally mentioned, you can't just linearly extrapolate the data into the future, can you? If you could, you would also predict that Jágr would score another goal in the second period, and a third goal in the third period. In that way, you would boldly predict a hattrick. You would have to claim that hats will start to land on the ice.

Again, those 7 pretty much safe victories won't mean anything in the semifinals where Czechia will face the winner of the Sweden-Germany quarter finals. If it's Sweden, we can't be sure yet that it's trivial to beat them because we haven't tried. The winner and loser of this semifinal game will play the final and the bronze medal game against two teams from the Canada-Russia, Finland-Norway list.

Well, I admit that the advantage of the home-like environment is significantly helping the Czech team. In fact, the Slovak capital of Bratislava may feel more like home than the Czech cities - a similar effect, to a lesser extent, exists in Germany and Austria as well. But in the Slovak case, it's more pronounced especially because most Slovaks, after the elimination of their team, became fans of the Czech team, too. Thousands of visibly Slovak fans on the streets of Bratislava wear both flags, among other symbols.

It's an authentic emotional relationship that's not being promoted by any centralized political power. After 18 years, they finally began to realize that they're damn close to their Czech brothers and it is kind of unrealistic to try to grow everything at the level of their village or even Slovakia which is still unnecessarily small for many purposes.

Still, Slovakia has managed to win the championship in 2002, too. Since its birth in 1993, the Czech Republic has won the gold medal 7 times, when I count the Nagano Olympics (and if I don't count the ongoing tournament yet, of course haha). Together, Czechia, Slovakia, and Czechoslovakia won 47 medals from the World Championships which beats Canada with 46, Sweden with 42, and Russia/Soviets with 41.
Luboš Motl v 7:20 PM
Share