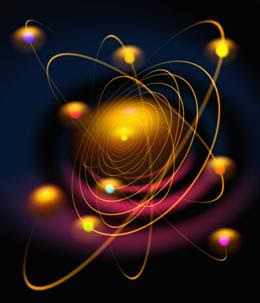 Nude Socialist discusses whether the electron is egg-shaped. I honestly couldn't figure out what they were really talking about before I looked at the paper in Nature,


Improved measurement of the shape of the electron


At the 90% confidence level, the size of the electron dipole moment d_e is smaller than

This experiment significantly (a few times) - but not "qualitatively" - improves the previous upper bounds. Note that as early as in 2005, this blog was talking about planned experiments that wanted to measure the electric dipole moments at the accuracy 100 times more accurate than the figure above.

Recall that CP-violation is needed to produce these electric dipole moments. The CP-violation by the Standard Model's CKM matrix (the phase in it) is too small to be seen. It's about 1e-30 e.cm, or 1,000 times smaller than the newest upper bound. New physics such as supersymmetry may predict much larger and potentially observable EDMs (which may often be observable enough to kill the model). But it doesn't have to be so.

For example, Brhlík, Everett, Kane, and Lykken (1999) have shown that a D-brane world based on type I string theory naturally implies the vanishing of new contributions to the EDMs without any fine-tuning even though the new CP-violating phases may be large!


Lumo on monstrous moonshine in Japanese

I received thousands of requests from the people in the Fukushima region who wanted to understand my 2007 text about the monstrous moonshine in string theory more intimately. So I have finally learned Japanese today and translated the article to the Fukushima dialect of Japanese. Enjoy and don't get discouraged by the obscene words on the first line beneath the title! ;-)


The Milky Way is gay

Our Galaxy has neighbors of the same sex. Risa Wachsler of Stanford has studied how many galaxies like to intimately share the place with other galaxies of the same sex. She found out that it is 4% of the galaxies. I guess that some of you may have expected the result. ;-)
Luboš Motl v 8:41 PM
Share