It's hard to believe that literally millions of inhabitants of the New York City could have survived decades without a decent restaurant. Food has been nearly unavailable - unless you count the third-world cuisines and freedom fries.

The most recent decent addition to the market occurred exactly fifty years ago, in 1961, when Ray Kroc - whose father was born in Břasy near Pilsen, 15 miles away from my home - bought some restaurants from the McDonald brothers for USD 2.7 million and made the company just a little bit bigger. ;-)


But as the New York Times blogs and the Wall Street Journal - among others - noticed, some humanitarian aid is finally coming to the City. ;-) On Monday, they are opening a new restaurant in the Bohemian National Hall, a building owned by the Czech Republic, on 321 East 73rd Street, (212) 861-1038.

They had to invent some witty but professional enough name. So they were waiting for inspiring telephone calls, decided to ignore ideas by anyone who hasn't collected at least two Oscars as a film director. Finally, Mr Miloš Forman called them and told them that the restaurant should be called "Hospoda" which is the most common Czech word for a pub. In Czechia, a hospoda is a building where many men are going every day to drink beer and to complain about everything. ;-)

The name sounds sufficiently easy to be pronounced and it happens to have no non-English characters. They should cook traditional but fancy enough Czech cuisine - and cuisine of nearby pseudo-Czech provinces, Austria and Bavaria (ABC when you combine them, funny). Well, the menu looks a bit exotic to me but it may be partly because they omitted the Czech names. 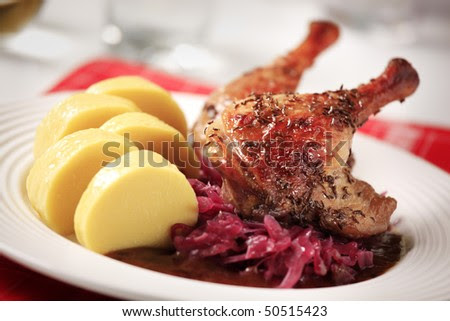 Well, the duck breast with red cabbage, apples, and potato dumplings sounds familiar enough and I would probably pick it, to be sure. The prices are just half an order of magnitude above what we pay for similar things in Pilsen but I guess that it will also be better. ;-)

This is called beer.

Of course, Pilsner Urquell is the main beverage over there but it's been reported that the Yankees will be educated it to drink it with the foam. :-) So if you're in the City, you may try it.

By the way, if you know how to counterfeit Pilsner beer at home, you may enter the Pilsner Urquell Master Home Brewer Competition - in August, NYC, DC, and Chicago. In 1842, dissatisfied Pilsner citizens and beer consumers hired the best guy they could - a young emerging Bavarian brewing big shot and boor Mr Josef Groll. He combined the Bavarian experience, his fresh ideas, and the unbelievably soft Pilsner water to the new classic.

If you were asked to enumerate at least one Czech soccer team, chances are that you would say "Sparta Prague". But that would be dumb! ;-) Sparta Prague is just a Buzerant Gang - although it doesn't rhyme in English :-) - and Prague is an irrelevant village.

FC Viktoria Pilsen celebrates 100th anniversary this year - 1911-2011 - which was an excellent opportunity to become the winner of the 2010-2011 Czech Gambrinus Soccer Extra League! We've been waiting since the Big Bang, for one century, and now it's here. Given the fact that the sponsor, Gambrinus, is a beer from Pilsen, it would be silly if someone else than Pilsen would win.

The Fall 2010 was excellent and the Pilsner team had built such an advantage over Sparta behind us that we couldn't lose it. Today, one round before the end, we have already secured the trophy. In fact, the people had to feel so certain that we would beat Ostrava today - it was 3-to-1, even though the score began at 0-to-1 after five minutes - that celebrations of the trophy were organized for tonight! ;-)

And the plans worked out perfectly. Semi-hardcore Pilsner fans such as your humble correspondent :-) watched the second period on a large screen on the Square of the Republic, the indisputable center of the city. And the players plus couch came there to celebrate, too. Add beer for free and fireworks - it was fun.

The Pilsner soccer deserved the victory. The team hasn't lost at home since August 2009. Also, it won both matches against Sparta this year. It was the only team that was playing a genuinely offensive game. Fans have been attracted and become almost as faithful and supportive as the Pilsner ice-hockey fans. Perhaps most importantly, it was a team with some chemistry that bound it together.

You know, I was in Great Boston when the cursed Red Sox won the baseball league after those long decades. Fortunately I had ear plugs so that I could sleep when the obnoxious drivers with their horns were trying to make the night unsleepable. You know, I admire Boston, it's an American classic, but I still had no special emotional attachment to it as a fan, and I have no idea about baseball. The soccer team in the town where I was born is different...
Luboš Motl v 5:27 PM
Share