Sean Carroll mentions a preprint arguing that it's been experimentally demonstrated that Kepler's laws fail when the acceleration of orbiting objects is below a certain constant a0:


The Breakdown of Classical Gravity?


X. Hernandez, M. A. Jimenez, and C. Allen looked at wide-orbit binary stars and they claim that for these small accelerations, the Kepler's (i.e. Newton's) formulae for the velocity should be superseded by a constant velocity


Such a modification is compatible with the MOND, Modified Newtonian Dynamics, theories whose goal is to claim that dark matter is not needed.

While I find the typical MOND theories with the ad hoc irrational extra vectors and scalars and/or nonlocalities to be awkward enough to be eliminated without tests, I can imagine that the observations above are actually valid and dark matter doesn't have to be exist, after all.

I have developed an explanation of the modified behavior for small acceleration that looks much more convincing than any MOND scheme I have ever seen. Let me call it HOND, Holographic Modified Dynamics.

As you know, gravitational phenomena in a quantum world like ours may be encoded on a holographic screen. In most cases, we expect the usual local dynamics to emerge out of the hologram, anyway. But is there some behavior for which the holographic nature of physics has to be taken into account - when the local bulk physics with the usual scaling laws is not a good approximation?

I believe that the low-acceleration regime is exactly a regime where this could be the case.

Consider a non-accelerating particle. It's connected with some kind of de Broglie wave, exp(-iEt+ipx). This wave is periodic in space and time. But when a particle accelerates with acceleration "a', then it moves along hyperbola whose center C is spacelike-separated from the point where "v=0" and the distance is 1/a, in c=1 units. 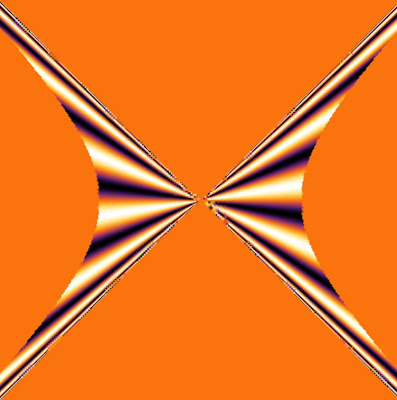 Imagining the de Broglie wave, the center C is where the wave may become ill-defined because the hypersurfaces of constant phase intersect at this center. I may need to draw a picture but I believe that many people understand me even without the picture. The existence of this center on the hologram may be needed for the usual Kepler scaling laws to emerge.

OK, I finally added a picture. The Mathematica command was


However, if the acceleration is too low, 1/a is too large and it may fail to fit into the visible Universe. Only a large enough hologram with many ways - and with the center C in it - produces the usual bulk physics. What is the acceleration for which you start to get deviations? Well, the size of the visible Universe is 8.8 x 10^{26} meters which is 2.9 x 10^{18} seconds.

Its inverse is 3.4 x 10^{-19} inverse seconds. Multiply it by the speed of light to get the acceleration in the usual units and you will get


That's my holographic prediction for the approximate acceleration below which you may start to get deviations from the usual emergent bulk physics because of the smallness of the hologram relatively to the wave patterns on it. What is their observed value of "a0"? Note that a priori, I could have received a figure that differed by dozens of orders of magnitude from what I got.

Anyway, their value is


It only differs by the missing zero in the middle of the number which doesn't really matter :-) - the difference is just 20% which led me to scream Wow when I first calculated it. Isn't it a rather amazing coincidence - or confirmed prediction, if you interpret it optimistically?

I will try to derive the new scaling law for the velocity at low accelerations when I have some time. Note that it's enough to show that the orbital velocity stays constant while Newton's force switches from the 1/r^2 law to the 1/r law, more precisely to


The switch from the inverse square law to the inverse proportionality looks like an effective decrease of the dimensionality by one - like in holography, indeed. The binary stars are exchanging 3+1D gravitons as long as the hologram including the center of the hyperbola fits into the Hubble-scale holographic screen. If it doesn't, the objects effective live on the boundary only and they attract by a 1/r force only. It sounds OK but there are still many difficult issues that remain to be clarified about this heuristic picture.

For example, why the heck is it proportional to sqrt(M) only where M is probably roughly the bigger of the two masses? In the holographic context, the square root may be similar to one of the relationships in AdS/CFT between the dimensions and masses.