I learned about the news because 1/3 of the TRF traffic this morning was directed to articles about Osama bin Laden.

Although many Obama's voters would prefer if this were how Osama should be treated, it wasn't the case. The clear order was to kill him, and once they killed him, they threw him to the sea - to agree with an Islamic counterpart of cremation - no country wanted to host the grave. It wasn't specified whether 72 American virgins were swimming in that sea.


Almost ten years later, the world's most famous terrorist was paradoxically killed by the most pro-Muslim president in the U.S. history. Well, at least he took the credit for the work of the U.S. troops and Pakistani intelligence.

Well, Obama didn't fail to mention that Osama was not only a Muslim leader but also a "mass murderer of Muslims". Holy cow. I listened to the speech and Obama actually said that Osama was not a Muslim leader. Surely he was. The most influential one. Because of this influence, the freshly and happily dead terrorist has also been the world's most wanted climate jihadist.

As people on Twitter say, Obama killing Osama is a sign of a weakly broken supersymmetry in Nature. We have found Osama - and now let's also find the Higgs boson bastard.

The Google Earth or Google Maps coordinates and picture of Osama's mansion are available at other blogs, much like the history of this successful search. What about the consequences? The stock market rally has largely evaporated. Taliban has promised to revenge for the death; meanwhile, Hamid Karzai told his Taliban countrymates that they're ludicrous. And many Muslim bigots don't want to believe that their hero is gone.

Khalid Sheikh Mohammed (CEO of 9/11) has told the U.S. investigators (and to us, via WikiLeaks) that if America hurts his boss, he has a prepared nuclear bomb in Europe that will be destroyed. That's nice and fair! And I am afraid that much of America could say Help yourself. ;-)

Just to be sure, a message for the Islamists: you shouldn't choose the Czech Republic because the defending ice-hockey champion just hammered Denmark, the country of heretics who draw Mohammed, 6-to-0. Four of the goals were scored within three minutes. ;-)


In remotely related news, today, the 20th annual March of the Living - from Auschwitz to Birkenau (a few miles) - is taking place. International Jewish students are brought to learn something about the Holocaust. 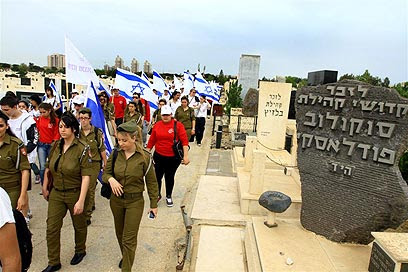 IDF soldiers are not missing

Of course, the acronym of March of the Living is MOTL (as in motl.org) - and there used to be times when March of the Living was ahead of your humble correspondent when you were searching for "motl". ;-) After some time, only the Magic Online Trading League could compete a little bit...
Luboš Motl v 6:45 AM
Share