The global warming orthodoxy is predicting a judgement day. But some competitors of the IPCC propose that the end of the world will come earlier than that.

In particular, Harold Camping (89), an engineer who studies the Bible quantitatively :-), has calculated that on May 21st, 2011, which happens to be today, the rapture will arrive and swallow 3 percent of the world population. Or maybe only 3 percent will survive: I hope that you don't think that this detail of the prediction is too important. The end of the planet Earth will follow exactly 5 months later.

(Oh, I am stupid. The 3 people who will be sucked up are of course those who eternally survive! The remaining 97 percent will spend 5 months on an Earth full of earthquakes, droughts, floods, heat waves, and diseases, aside from 859 other bad things. Thanks to R.L. for a comprehensible clarification.)

As you see on the picture, people will be sucked out of their cars, revert the law of gravity, and they will fall up towards Jesus who will crystallize somewhere in the mid troposphere. According to Wikipedia, the topological defect should begin to absorb the dead and some of the alive folks should follow afterwards. For logistic reasons, Jesus will serve the individual time zones one by one, so expect your spectacular events at 6 p.m. local time.

(If you badly need to continue your life, you may avoid the event by flying to the West, around the globe, so that you will never see 6 p.m. on your watches today. But don't forget to tell your pilot that when the aircraft lands, many of the people at the destination airport will be dead or shocked by the disappearance of their colleagues. He shouldn't wait for any instructions while landing.)


People in Arizona are getting ready for the event that the mankind has been waiting for since the Big Bang, or at least since recombination. Camping's talk show is being broadcast by 66 radio stations and there are 3,000+ Google News articles about Camping's rapture prediction. 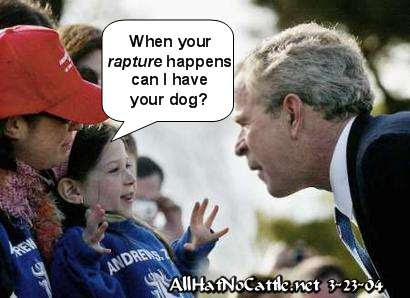 That's almost 1/2 of the number of articles dedicated to the whole competing global warming orthodoxy. That gives us some hope that global warming is slowly returning to the status of one of numerous crackpot theories promoted by a limited group of unhinged people. It's hard to disagree with Rush Limbaugh who finds an isomorphism between the AGW and rapture believers.

Meanwhile, the people who discovered the Higgs boson think that they have caused the rapture while others are expecting the rapture while reading books about an intimately interacting supersymmetry at a bar.
Luboš Motl v 7:36 AM
Share