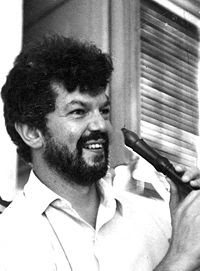 Together with Francois Englert, they were the first pair that published a 1964 paper discovering and explaining the Higgs mechanism, or Englert-Brout-Higgs-Guralnik-Hagen-Kibble mechanism for short. They managed to include some arguments that the theory with massive gauge bosons produced in this way would be renormalizable, something that would be later proved by Gerardus 't Hooft who shared the 1999 Nobel prize for this discovery with his advisor Martinus Veltman who was bold enough to ask his student to solve the problem.

With all the five other authors, Brout still received the 2010 Sakurai Prize.


It's much less known that his article written with Englert and Edgard Gunzig not only won the 1978 Gravity Research Foundation's essay award but it also made some preliminary steps towards inflation.

Czech clarinetist and comedian Mr Ivo Pešák died today, after complications following a bypass surgery he underwent 4 years ago. He has been a multi-dimensional patient; his collection included a serious form of diabetes, among many other things. His toes had to be amputated some time ago. Updates news say he died of pneumonia.

In the video above, Mr Pešák - the fatter guy - is seen as a member of DýzaBOYS, the "Czech Depeche Mode" - a band that was made as a parody of disco music but it could have actually competed with them.

Throughout much of his life, Mr Pešák was a part of Banjo Band of Ivan Mládek. Together with Mr Ivan Mládek, he also recorded his globally most famous video, Jožin z bažin, my most favorite song when I was 5 years old. Mr Pešák became an unlikely hero of dancing in 2008 when the video clip suddenly became, a whoppy 30 years after it was recorded, a top viral video in neighboring Poland.
Luboš Motl v 11:18 AM
Share